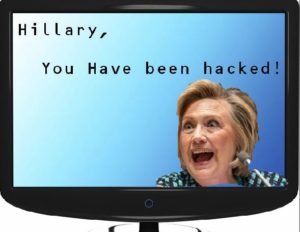 The most explosive finding in the FBI’s notes regarding the investigation into Hillary Clinton’s “homebrew” email server was that the system was penetrated by a hacker using the TOR browser.

The recently released FBI notes on the Clinton email server investigation blew the lid on one of the biggest questions regarding Hillary’s unauthorized and unsecured system – regardless of intent, did she place US national security at risk? The FBI report seems to suggest that was a real possibility.

“The FBI’s review of available Internet Information Services (IIS) web logs showed scanning attempts from external IP addresses over the course of Pagliano’s administration of the server, though only one appears to have resulted in a successful compromise of an email account on the server,” said the report.

It continued, “Forensic analysts noted that on January 5, 2013, three IP addresses matching known Tor exit nodes were observed accessing a user e-mail account on the Pagliano Server believed to belong to President Clinton staffer (redacted name). FBI investigation indicated the TOR user logged into (redact name’s) e-mail account and browsed e-mail folders and attachments.” Notably, the email account in Hillary’s server that was breached was neither a State Department employee nor Secretary Clinton herself but rather a staffer to former President Bill Clinton likely in relation to work on the family’s controversial charitable foundation.

However, the FBI report does establish that Clinton’s private email server had been breached by a hacker due in large part to her lack of any modicum of a security system at all and that her chosen IT professional did not even realize the breach had occurred. FBI Director James Comey explained in questioning before Congress that Hillary’s emails were less secure than those on the average civilian Gmail account which at least has some security protections and monitoring.

The FBI explained that they were “unable to identify the actor(s) responsible for this login or how (redacted staffer’s) login credentials were compromised,” but in an interview with the staffer in question they acknowledge they were completely unfamiliar with Tor software and that they were not the ones who accessed the account on the time in question.

While the FBI did not find conclusive evidence that Hillary Clinton’s email account, one of several on the same server, had been accessed by the hacker they are unable to rule it out and for good reason.

The access to a single account in the system also creates the possibility that a sophisticated hacker would be able to patch a backdoor into the entire system or, if it were an unsophisticated hacker, they could still easily gain access to Hillary’s email by sending her an email from the trusted staffers account with a link to malware. In either event, the contents of her email account could have been accessed without a noticeable login abnormality. The only question now is whether the Clinton campaign will come up with some conspiracy claim that Russia hacked Hillary’s system between 2009 and 2013 because they somehow had the foresight to know Donald Trump would run for office or whether the mainstream media will continue to give her a pass on potentially exposing top secret American intelligence.

Zuckerberg's social media giant censors open and honest discussion about the dangers of extremism by Edmund Kozak Facebook and Mark...