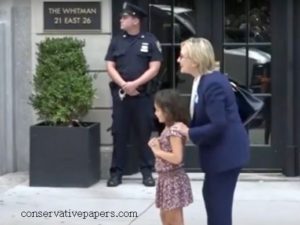 Hours after Hillary Clinton collapsed in front of bystanders that posted the videos online, after she reportedly recovered for two hours inside Chelsea’s apartment. Chelsea has two young children in the home.

Soon after that Clinton emerged again and the supposedly sick with Pneumonia Clinton recklessly embraced a child on a New York City street on Sunday, despite the fact that the illness she claims to have is contagious.

She reportedly recovered for two hours inside Chelsea’s apartment. Chelsea has two young children in the home.

Moments later, a child ran past a protective detail to greet Clinton in what some are saying was a staged event.

Hillary then touched her on the shoulders and bent down nearer to her, despite pneumonia being a contagious illness.

“Walking pneumonia” sounds like it could be a character in a sci-fi horror flick. Although this form of infectious pneumonia can make you miserable, it’s actually the least scary kind of pneumonia. That’s because it’s a mild pneumonia and does not generally require hospitalization. You could have walking pneumonia and not even know it. …

And, even though the disease is contagious, it spreads slowly. The contagious period in most cases lasts less than 10 days. Researchers also think it takes prolonged close contact with an infected person for someone else to develop walking pneumonia; still, there are widespread outbreaks every four to eight years.

If Hillary Clinton knowingly has a contagious illness, why is she potentially exposing a child to it?

Those of you who followed the post September 11th 2012 events will well remember Secretary Clinton’s team initially said she had “a cold”, then “a severe cold”.  Days later the cold was given as a reason for her passing out. Another day passed and a “concussion” was attributed to her passing out.   Several more days later and, with a visible hospital stay, “blood clots” were given as the reason for her medical care.

Researchers became cynics quickly upon evaluating Clintons events closely at the time and speculated if the real issue was “a stroke”, which held lingering effects often noted when she did reappear in 2014 for her book tour.

An inability of Hillary Clinton to effective use normal motor skill function, a seemingly obvious lack of visual acuity, and the consistent need for physical aid (specifically pointing her and guiding her) was noted for almost two years post 2012 medical episode.

A four year old child in Australia wants to get a sex change operation and will be undergoing a sex...