In 1990, adult immigrants were hardly a factor in North Carolina’s Randolph County, making up a little more than 1 percent of all residents 18 and older.

By 2014, the adult immigration population had ballooned 948 percent. The 8,950 foreign-born adults that year were 6.1 percent of the entire county population. That is a 683 percent increase in the immigrant share of the county’s adult population.

“We’re not prepared for them. We’re being overrun by it.”

Among the U.S. counties with a total population of at least 100,000 in 1990, only one — North Carolina’s Robeson County — had a faster rise in the share of adults born in another country. Arnold Lanier, a county commissioner in Randolph, said the huge influx of foreign residents has strained social services and limited budgets.

“We’re not prepared for them,” he told LifeZette. “We’re being overrun by it.”

The pace of the immigrant population growth makes Randolph County something of an outlier, but a study released Monday by the Washington-based Center for Immigration Studies shows that it is far from alone. Drawing on data from the U.S. Census data, the think tank demonstrates how profoundly immigration has changed many communities. Researchers focused on immigrants 18 and older because they have the most immediate impact on a community.

“The impact in some of these counties is hard to overstate,” said Steven Camarota, the study’s author.

The political ramifications are hard to calculate. Camarota, director of research at the center, noted that even though immigration touches more Americans that it used to, most people still live in areas with relatively low levels of migration.

“For large numbers of Americans, the issue is still an abstraction,” he said.

Camarota said the reasons why the immigrant population is exploding vary county by county. In some cases, he said, jobs lure newcomers, who come both legally and illegally. In others, legal immigrants arrange to bring their relatives to the United States. Once a county reaches a critical mass of immigrants, people from the home country start to seek it out when they arrive, he said.

A “spillover effect” can explain why some counties have seen sharp increases in adult immigrants, Camarota said. Like other residents of high-population counties, immigrants tend to spread out to surrounding counties.

For example, immigrants living in Arlington, Virginia, have moved to neighboring counties in Northern Virginia, increasing the foreign-born population in those places.

“Harder to explain is why some areas that seem to be similar to other areas get a lot of immigrants while the others do not,” he said.

For instance, the Baltimore region has a relatively small share of adult immigrants, even though Montgomery County has a lot. Immigrants made up just 9 percent of adults in the city of Baltimore in 2014, while the proportion in Baltimore County was 13.1 percent. Meanwhile, almost 40 percent of the adults in Montgomery County in the Washington suburbs were born in another country, up from 21.5 percent in 1990. 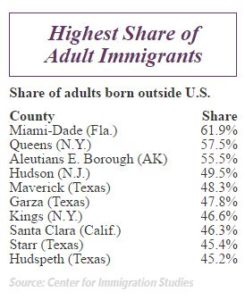 In some cases, a massive increases in a county’s immigrant population can have a straightforward cause that is not obvious from looking at the numbers on a spreadsheet. Take Stewart County, Georgia, along the the border with Alabama. The largely rural county had just nine adult immigrants in 1990, out of a total population of 5,654.

By 2014, the number of immigrants had swelled to 1,138, even as the overall population has increased to just 5,900. Immigrants in the latest census estimate made up 19.3 percent of all adults.

What could account for such a spectacular surge in immigrants? A spokeswoman for the Stewart County government attributed the increase almost entirely to the construction of the Stewart Detention Center, a privately run facility that opened in Lumpkin in 2004 to house illegal immigrants for Immigration and Customs Enforcement authorities. It has a capacity of 1,752, according to the facility’s owner, Corrections Corporation of America.

In the case of Randolph County, North Carolina, Commissioner Lanier said jobs have been the lure for immigrants. They first wave came to work in the furniture factories, and when most of those jobs left for other countries, the main draw has been the region’s chicken farms.

But Lanier said the newcomers are poor and require more in government assistance. They are “raping the system,” he said.

Lanier estimated that about 4 of 7 of the county’s residents use at least one social service program, up from 1 in 7 a couple decades ago. Immigrants, he said, is a big part of that increase.

Though polls show Republican Donald Trump trailing in North Carolina, Lanier predicted his immigration message will carry him to a victory the state by at least 5 percentage points.

“They’re fed up with what’s going on,” he said.

Hours after Hillary Clinton collapsed in front of bystanders that posted the videos online, after she reportedly recovered for two...