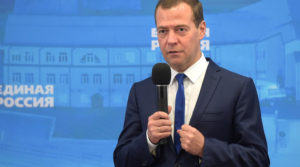 (Moscow) The terrorist attacks in the European Union are a consequence of inelaborate migration policy, and extraordinary solutions to preserve the bloc’s unity are necessary, Russian Prime Minister Dmitry Medvedev said on Saturday.

He said that Russia was “interested” in the preservation of the European unity.

“Europe has always been a comfortable environment, a place to live. And we largely took an example of how to develop the territories. So far, there is, of course, so much to learn, but the problem is that, unfortunately, the European Union… had an absolutely thoughtless attitude toward migration policy… As a result, millions of people arrived in Europe, the adherents of a completely different culture. Let alone the extremists and terrorists, who also get there. They have, in fact, changed the European landscape. Europe has become troubled,” Medvedev said in an interview with the Vesti v Subbotu television program.

The Russian prime minister added that the notorious and “horrific” events should become a lesson for both Europe and Russia, as Brussels should take “extraordinary” measures to guarantee safety and unity. As for Moscow, the European example should warn it against “hasty decisions” and help value domestic safety and stability.

Since 2015, major shocks hit the European Union, in particular, in the face of migration crisis, which made the states agree to a mandatory relocation quota system, enhance border controls and allocate additional aid to the refugee and rights protection bodies. Moreover, devastating terrorist attacks hit Brussels and Paris in November and March, respectively, prompting EU authorities to increase safety and security and engage in the international fight against terrorism.

Despite stronger measures to boost security, more European cities became targets as a wave of attacks has occurred in Europe, including a truck running over a crowd in France’s Nice, a suicide bombing near an open-air music festival in Germany’s Ansbach, and a hostage taking at a church in France’s Saint-Etienne-du-Rouvray, Normandy, in which a priest was killed.

by Pamela Williams Jason Chaffetz, Chairman of the House Oversight Committee says they are ready to bring charges against Hillary...