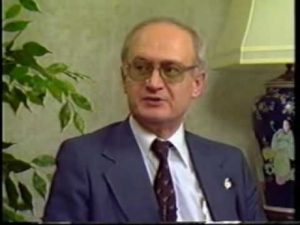 Bezmenov states that once the liberal “hippies” in the Clinton-era were subverted with collectivism, they went on to accumulate power and institutionalize harmful policies that would transform America into a failed state that no longer posed a threat to the USSR. The USSR has of course since been dissolved, but the subversive ideas have not stopped, and ironically has served as blowback to the current non-communist Russian state.

The real driving force of this war of aggression is IDEOLOGY — something you cannot eat, wear or store for a “rainy day”. An integral part of this war of ideology is IDEOLOGICAL SUBVERSION — the process of changing the perception of reality in the minds of millions of peoples all over the world.

His message in 1985 was to identify how America and Canada were in a long-term program to undermine their integrity… Not by communist Russia, but by “The System” which he further described as a world wide conspiracy.Steps he described were:
Demoralization : 15-20 years to complete
Destabilization : months to years to complete
Crisis : months
Kill lists : over night
Normalization : endless

Simply because, you see, the useful idiots the, the leftists who are idealistic believing in the beauty of
soviet socialist or communist… so whatever the system… when they get dissolution they become the worstenemies… that’s why my KGB instructors specifically made the point never bother with leftists.

Forget about his political prostitutes… aim higher. This was my instruction: try to get into into up large circulation established conservative media… rich, filthy-rich moviemakers, intellectuals (so-called), academic circles cynical, egocentric people who can look into your eyes with angelic expression and tell you a lie… these are the most recruitable people, people who lack moral principles, who are either too greedy or suffer from self- importance… they feel that they matter a lot more than others… These are the people the KGB wanted very much to recruit.

The Rules Of Revolution”

1 . Corrupt the young, get them interested in sex, take them away from religion. Make them superficial and enfeebled.

2. Divide the people into hostile groups by constantly harping on controversial issues of no importance.

3. Destroy people’s faith in their national leaders by holding the latter up for contempt, ridicule and disgrace.

4. Always preach democracy, but seize power as fast and as ruthlessly as possible.

All you have to do to “screw up” the status quo of a free nation, is to borrow ONE false idea from the ideology of a communist or totalitarian government. For the sake of simplicity, I have chosen the idea of “egalitarianism”. “People born equal therefore must be equal”. Sounds great. But look at yourselves. Were you born equal? Some of you weighed 7 pounds at birth, others 6 or 5 . . . Are you NOW equal? In any way? Physically, mentally, emotionally, racially, spiritually? Some are tall and dumb, others — short, bald and clever.

Now, let’s figure out what will happen if we LEGISLATE EQUALITY, and make the concept of “equality” a cornerstone and pillar of socio- economical and political system. All right? You don’t have to be a great economist or sociologist to foresee that some of the people who are “less equal” would demand as much as those who are “more equal” BY LAW!

Aha, now you’ve got it. There will be some who get more for GIVING less and take advantage of those, who are even “less equal”, say, in the art of TAKING. And to avoid the squabble for “equal redistribution” you will have to introduce a THIRD FORCE — the State. Why? Because people were never equal, are not equal and if God wanted us to be equal He would probably have made us equal.

How egalitarianism destroys the economy

People who have declared themselves to be equal will inevitably come to expect more for their individual needs, which sooner or later will tragically come to conflict with the “unequal” reality. That will automatically produce discontent. Unhappy and discontent masses are less productive than those who are happy being what they are and making the best of it. Decreased productivity, as we all know, leads to such unpleasant things as inflation, un-employment and recession. These, in turn, cause social unrest and instability, both economical and political.

Most of the actions are overt, legitimate, and easily identifiable. The only trouble is — they are “stretched in time”. In other words, the process of subversion is such a long-term process that an average individual, due to the short time-span of his historical memory, is unable to perceive the process of subversion as a CONSISTENT and willful effort. That is exactly how it is intended to be: like the small hand of your watch. You know it moves, but you CAN NOT SEE it moving.

Demoralization of the masses is an important step of subversion

The purpose of this process is to change your perception of reality to such an extent, that even despite an abundance of information and evidence about the danger of Communism, you are unable to come to sensible conclusions in your own interests and in the interests of your nation.

[…]Demoralized and enfeebled ‘masses’ tend to grab the ‘easiest’ short-cut solution to social ills and socialism seems to them to be the best answer.

Subversion can happen through entertainment

A group of rock or pop-musicians with a message of ‘social-justice’ sugar-coated in popular ‘spiritual’ tunes can be actually more helpful to the KGB than someone standing in the pulpit preaching Marxist-Leninist doctrine. The sugar-sweet messages of social equality from the crooning mouths of the entertainers is quite enough to accomplish the aims of the KGB without any overt activity on their part.

The way that George Soros finances Pussy Riot and FEMEN to subvert Russia is the same method the KGB used to do to subvert America. There’s nothing new under the sun—only the players have changed.

Deliberate distraction of masses with non-issues

[An issue that] may benefit a few is a non-issue (civil rights of homosexuals is not an issue; defending sexual morality is the larger, real issue).The main purpose of non-issues and the devastating result of their introduction is the SIDE-TRACKING of public opinion, energy (both mental and physical), money and TIME from the constructive solutions. Soviet propaganda elevated the art of infiltrating and emphasizing non-issues in American public life to the level of actual state policy.

The American romance with state-run education as encouraged by KGB subverters has already produced generations of graduates who cannot spell, cannot find Nicaragua on a world map, cannot THINK creatively and independently.

Does socialism allow for the human need of self-destruction?

Dr. Shafarevich in analyzing the ‘dead’ civilizations of Egypt, Maya, Mohenjo-Dara, Babylon, etc., comes to an ominous conclusion: EVERY ONE OF THESE CIVILIZATIONS DIED WHEN PEOPLE REJECTED RELIGION AND GOD, AND TRIED TO CREATE ‘SOCIAL JUSTICE’ ALONG THE SOCIALIST PRINCIPLES. Thus, Socialism, according to Shafarevich, may be a manifestation of an inborn human instinct of SELF-DESTRUCTION, if unrestrained — leading ultimately to PHYSICAL DEATH OF ALL MANKIND.

You must love Big Brother

In the struggle for the ‘final victory of Communism’, the goal of the subverter is to substitute, as slowly and painlessly as possible, the concept of loyalty for NATION with loyalty to the “Big Brother” welfare state, who gives everything and is able to TAKE everything, including personal freedom — from every citizen.

Prediction of Obama’s rise to the Presidency

All that will be needed is to ‘elect’ a ‘progressive thinking’ president who will be voted to power by Americans, who have been addicted to welfare and ‘security’ as defined by Soviet subverters.

At some point, the Soviet method of control was identified by Western elites as a better method than what Christian-based democracy offered. Our elites must have had the knowledge that it would likely lead to the collapse and death of nations that used it. So why did they do it? For the same reason that a Soviet sympathizer will sell out his country for access to a car, because it benefits them in spite of harming a nation they’re from. Why do they care if you and your family collapse into poverty and mindless degeneracy as long as they have their power, wealth, and estates?

I recently wrote about how depopulation is an agenda being actively usedby the elites in the Western world. Would you say that a socialist system that will surely lead to national death is compatible with depopulation? It’s clear that they go hand-in-hand. At the same time our elites are ushering in the collapse of the system, they amplify their method of authoritarian control to ensure the masses don’t threaten their lives and their theft of billions of dollars of wealth from the system in order to weather the inevitable storm that they created and then accelerated.

The top one-hundred families of the world know of the cycles of empires. They know that America and Europe had to inevitably decline relative to other developing parts of the world, but they refuse to accept that they will be guillotined in the process. To preserve their wealth and power, they have used collectivist ideology, banking control, and depopulation agenda to ensure they stay in power even after this cycle plays its course.

In effect, they aim to prolong their rule, control, and wealth for eternity while praying to Baphomet, their owl god, or whomever is popular in their secret societies, regardless of how many people are hurt by their ideas of egalitarianism and environmentalism, and regardless of how many people die through their failed policies and false flag events.

During his lifetime, Bezmenov did not succeed in steering America away from socialism, and we are now suffering because of it. Even though he is no longer with us, I hope this article today vindicates his ideas and predictions. He was right all along.

This article was originally published on Roosh V.

In Case You Missed It:  The Great Reset Crowd's Overreach Will Come Back to Bite Them
Posted in Tyranny and tagged Communism, Democrats, Liberalism, Obama.

The Woman Behind the Group the Left Loves to Hate

It was 9 o’clock at night when Bill Meierling, a top official at the American Legislative Exchange Council, received the...