As Barack Obama prepared to enter the final year of his presidency, he sat down for an interview with Olivier Knox to discuss a bold new policy change. He had announced a year earlier that the United States would be ending its decades-long isolation of Cuba and seeking rapprochement with the authoritarian Communists who run the island nation 90 miles from Florida. In this December 14, 2015, interview, Obama described his new approach in greater detail. The change he proposed dominated headlines for days.

There was other big news in the interview—though this the media didn’t treat as such. The president declared that he remained committed to closing the detention facility at Guantánamo Bay, despite strong objections from Republicans and some Democrats. Obama had campaigned in 2008 on closing Guantánamo and as one of his first acts upon taking the oath of office signed Executive Order 13492 directing his national security team to shutter the facility within a year:

Almost seven years later, much to Obama’s frustration, the facility remained open. Closing it had proved much more challenging than Obama had theorized as a candidate trying to win an election and a new president acting on his idealism. It turned out that the jihadists who remained in Guantánamo were there for a reason. Many of them were truly, as the cliché had it, “the worst of the worst.” Al Qaeda leaders, top Taliban officials, the men who planned the 9/11 attacks, veteran jihadists caught plotting follow-on attacks on U.S. interests, and even those al Qaeda operatives believed to be charged with carrying out the next wave of assaults on the U.S. homeland.

The news in the president’s interview wasn’t that he intended to make good on his promise to close Guantánamo, however belatedly. It was instead the president’s attempt to mislead the American people to accomplish his controversial objective.

“I am absolutely persuaded, as are my top intelligence and military advisers, that Guantánamo is used as a recruitment tool for organizations like ISIS,” Obama said, endeavoring to create a national security rationale for closing the detention facility. “And if we want to fight them, then we can’t give them these kinds of excuses.”

This isn’t true. There is virtually no evidence that jihadists use Guantánamo as a significant recruiting tool, and national security experts from across the political spectrum who have tested the claim have judged it false. 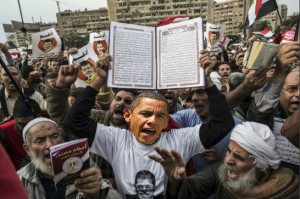 He wasn’t finished. “Keep in mind that between myself and the Bush administration hundreds of people have been released and the recidivism rate—we anticipate, we assume that there are going to be—out of four, five, six hundred people that get released—a handful of them are going to be embittered and still engaging in anti-U.S. activities and trying to link up potentially with their old organizations,” Obama said.

That wasn’t true. When Obama made this claim, 653 detainees had been released. Of that group, 196 had been confirmed (117) or suspected (79) of returning to jihadist activity upon their release. Those numbers came from the office of the director of national intelligence and represent the U.S. government’s official count of Guantánamo recidivism. Nearly one-in-three former detainees returned to the fight, not a “handful,” as the president suggested.

In Case You Missed It:  Reports Indicate Justice Alito and His Family Have Been Moved to a Secure Location
Posted in Terrorism, Tyranny and tagged Guantanamo Bay, Jihadists, Muslims, Obama, Terrorism.

More than 800 immigrants who were set to be deported have mistakenly been given U.S. citizenship by the Obama Administration....