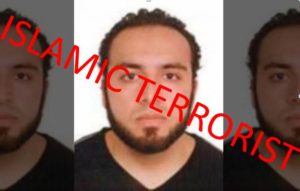 Ahmad Khan Rahami, a Muslim terrorist arrested for this weekend’s series of bombings in New York and New Jersey, had traveled to Pakistan and Afghanistan several times without detection by the Obama administration.

Rahami’s travels and time spent in Pakistan are the subject of intense scrutiny by U.S. investigators who are now trying to determine whether the suspect became radicalized during his travel and what connections, if any, he may have had to foreign terrorist organizations or militants.

Rahami has made at least three and possibly four trips to Pakistan over the past 10 years and ebcame very religious inside Islam, one official said. It’s not clear where he traveled within the country and particularly if he spent time in areas near the border with Afghanistan that have been the frequent target of U.S. drone strikes aimed at terrorist groups.

Rahami’s father also was in Pakistan as recently as July 2011, according to the family’s attorney, who informed a judge in a civil suit to which the elder Rahami was a plaintiff that he was not expected back in the country in time for a court proceeding the following month.

In September 2011, the lawyer informed the judge that while the father had returned, his “family is in Afghanistan” but was expected to return within days.

A senior U.S. official said that Rahami’s oldest brother is in Pakistan now.

Two U.S. officials said that Rahami was not on any U.S. government terrorist watch lists. Had he been, it’s possible that federal authorities would have been alerted if Rahami traveled outside the United States.  It should be required that all Muslim be on a watch list and wghen they leave the country and return their passport are checked and too see if they travel to any Islamic country they need to automatically be put in a watch list.

Rahami a Muslim came to the U.S. as a child in 1995 as the son of an Afghan asylum seeker. There has been some confusion over when Rahami or his family were officially granted legal residency in the country, but it may have taken some time for their application to be processed and approved.

Rahimi had a series of escalating run-ins with the law beginning in 2008, when he spent a day in jail for unpaid parking tickets, and another in 2012 after he allegedly violated a restraining order, The New York Times reports. In 2014, Rahami spent three days in jail on weapons and aggravated assault charges, after allegedly stabbing a person in the leg, The New York Timesreports. A grand jury dropped Rahami’s charges for the fight, which allegedly began as a domestic dispute.

The hunt for a New York-area Islamic bomber began Saturday morning when a set of pipe bombs exploded at a 5K race in New Jersey. The search escalated following a large explosion that injured 29 people in Manhattan’s Chelsea neighborhood Saturday night.

The explosive devices track closely to what was suggested in al Qaeda’s Inspire magazine in an article titled, “Make a bomb in the kitchen of your mom.” The guide was written by Samir Khan, a U.S. citizen born in Saudi Arabia who fled to Yemen to join Anwar al-Awlaki, an American cleric turned al Qaeda propagandist.

Islam is a religion based on a violent pedophile prophet that slaughtered his way to power,  devout Muslims take the Qu’ranic script literally as Mohammad is the most perfect man inside Islam, he was a Barbarian to anyone outside of Islam.  Many Muslims read the Islamic text and are later inspired to commit terrorism to follow Islam as it founder did.

By Walid Shoebat When it comes to the war on terror, the big problem in this country are the so-called...