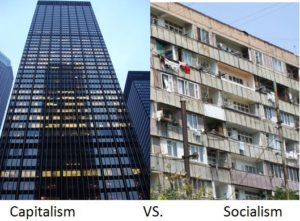 Experimentation is a major tool in the scientist’s arsenal. We can put the same strain of bacteria into two Petri dishes, for example, and compare the relative effects of two different antibiotics.

We could then take this war-torn country and divide it into two parts. It would have similar people, similar climate, similar potential trading partners, similar geography – but one part is rebuilt using capitalism as its base, while the other rebuilds using socialism and its principles. We’d let the virtues of each system play out and see where these two new countries would be after, say, fifty years.

Don’t you wonder what the outcome might be? Well, as it turns out, we have already performed The Experiment. It’s post-war Germany.

Following the devastation of World War II, Germany was split into two parts. The German Federal Republic, or West Germany, was rebuilt in the image of the western allies and a capitalist legal-political-economic system.  By contrast, the German Democratic Republic, or East Germany, was reconstructed using the socialist/communist principles championed by the Soviet Union. The Experiment pitted the market economy of the West against the command economy of the East.

On the western side, considering what’s being taught in our schools, one might expect that “greedy capitalism” would create a state where a few people became the rich elite, while the vast majority were left as deprived masses. Socialism, by contrast, promised East Germany the best that life had to offer, through rights guaranteed by the state, including “human rights” to employment and living wages, time for rest and leisure, health care and elder care, and guaranteed housing, education and cultural programs.

So the Petri dishes were set, and The Experiment began. In 1990, after just 45 years, The Experiment abruptly and surprisingly ended – with reunification back into a single country. How did it work out?

In West Germany, capitalism rebuilt the devastated country into a political and economic power in Europe, rivaled only by its former enemy, Great Britain. Instead of creating a rich 1% and a poor 99%, West Germans thrived: average West Germans were considerably wealthier than their Eastern counterparts. The country developed economically, and its people enjoyed lives with all the pleasures that wealth, modern technologies and quality free time could provide.

By contrast, East Germany’s socialist policies created a state that fell woefully behind. Its people were much poorer; property ownership was virtually non-existent amid a collectivist regime; food and material goods were scarce and expensive, available mostly to Communist Party elites; spies were everywhere, and people were summarily arrested and jailed; the state pretended to pay its workers, and they pretended to work. A wall of concrete, barbed wire and guard towers was built to separate the two halves of Berlin – and keep disgruntled Eastern citizens from defecting to the West. Many who tried to leave were shot.

By the time of reunification, productivity in East Germany was barely 70% of that in West Germany. The West boasted large, vibrant industries and other highly productive sectors, while dirty antiquated factories and outmoded farming methods dominated the East. Even staples like butter, eggs and chicken – abundant and affordable in West Germany – were twice as expensive in the eastern “workers’ paradise.”

Coffee was seven times more expensive, while gasoline and laundry detergent were more than 2½ times more expensive. Luxury items, like automobiles and men’s suits were twice as expensive, color televisions five times more costly. About the only staple that was cheaper in East Germany were potatoes, which could be distilled into vodka, so that lower caste East Germans could commiserate better with their abundant Russian comrades.

Moreover, state-guaranteed health care in the East did not translate into a healthier society. In 1990, life expectancy in the West was about 3½ years longer than in the East for men, and more than 2½ years longer for women. Studies found that unfavorable working conditions, psychological reactions to political suppression, differences in cardiovascular risk factors and lifestyles, and lower standards of medical technology in East Germany were largely responsible for their lower health standards.

The socialist mentality of full employment for everyone led to more women working in the East than in the West. This pressure resulted in better childcare facilities in East Germany, as mothers there returned to work sooner after giving birth and were more inclined to work full-time – or more compelled to work, to put food on the table, which meant they had to work full-time and run the household. This also meant East German children had far less contact with their parents and families, even as West Germans became convinced that children fared better under their mothers’ loving care than growing up in nurseries.

As the education system in East Germany was deeply rooted in socialism, the state ran an extensive network of schools that indoctrinated children into the socialist system from just after their birth to the university level. While it’s true that today East Germans perform better at STEM (science, technology, engineering, math) studies than their Western counterparts, that may be explained in part by the influx of numerous poorly educated immigrants to former West German areas, and the extensive money invested in the eastern region since reunification.

However, schools of the East were not intended to establish creative thinking, which results in creativity and innovation. Rather, they were authoritarian and rigid, encouraging collective group-think and consensus ideas, rather than fostering outside-the-box thinking, novel philosophies and enhanced productivity. Thus, East German technology was slow to develop and students were often overqualified for available jobs.

Did the East gain any advantage? Nudism was more prevalent in the East, if that was your thing.  Personal interaction was higher too, because telephones and other technologies were lacking. But even though East Germany was much better off than other Soviet satellite countries (a tribute to innate German resourcefulness), East German socialism offered few advantages over its capitalist western counterpart.  In fact, in the years since reunification, homogenization of Germany has been slow, due largely to the legacy of years lived under socialist domination, where any work ethic was unrewarded, even repressed.

Freedom was the single most important ingredient that caused West Germany to succeed. Freedom is the elixir that fuels innovation, supports a diversity of thought, and allows people to become who they want to be, not what the state demands they must be. When the government guarantees equality of outcomes, it also stifles the creativity, diversity, ingenuity and reward systems that allow people and countries to grow, develop and prosper. The Experiment has proven this.

These days in the United States, however, forgetful, unobservant and ideological politicians are again touting the supposed benefits of socialism. Government-provided health and elder care, free tuition, paid day care and pre-school education, guaranteed jobs and wages are all peddled by candidates who feel government can and should care for us from cradle to grave. They apparently think East German socialism is preferable to West German capitalism. Have they learned nothing from The Experiment?

A friend of mine believes capitalism is greedy and evil – and socialism, if “properly implemented,” will take us forward to realizing a better future. I counter that The Experiment proves society is doomed to mediocrity at best under autocratic socialism. Indeed, those who turn toward the Siren call of socialism always crash upon its rocks. But my friend assures me: “Trust me, this time it will be different.”

By Daniel Greenfield The wave of Muslim refugee terror began with a bomb targeting a U.S. Marine charity run in...