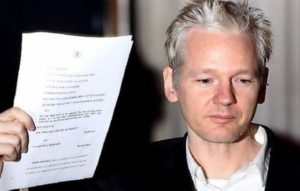 Hilary Clinton is in serious trouble and we are not talking about her health.  Two very damaging facts came from Wikileaks Assange and he said the worst is yet to come, closer to the election.  So damaging not only will she likely loose voter confidence, she could be facing prison time yet again, and it going to be hard for the FBI to excuse these crimes.

We expect Obama will pardon Clinton prior to leaving office, to save her from serving a life sentence for her crimes.

The first bomb dropped by Assange that during Obama’s second term, Secretary of State Hillary Clinton authorized the shipment of American-made arms to Qatar, a country beholden to the Muslim Brotherhood, and friendly to the Libyan rebels, in an effort to topple the Libyan/Gaddafi government, and then ship those arms to Syria in order to fund Al Qaeda, and topple Assad in Syria. Clinton took the lead role in organizing the so-called “Friends of Syria” (aka Al Qaeda/ISIS) to back the CIA-led insurgency for regime change in Syria.

Under oath Hillary Clinton denied she knew about the weapons shipments during public testimony in early 2013 after the Benghazi terrorist attack. In an interview with Democracy Now, Wikileaks’ Julian Assange is now stating that 1,700 emails contained in the Clinton cache directly connect Hillary to Libya to Syria, and directly to Al Qaeda and ISIS.

The second “smoking gun” is again regarding Hillary Clinton’s email scandal, as new reports on Tuesday document that an aide apparently had asked the online community about the best process for stripping out IDs from archived emails.

Somebody working IT for Hillary went to Reddit and asked Redditors if any of them knew how to do this! ‘Do you know how to strip/remove content from very VIP emails?’ This request was made on July 24, 2014.

“After that is when somebody from her IT team, it is suspected, got hold of Reddit and said, ‘Is there anybody here who can tell me how to mass, to in bulk delete, and remove content of very VIP email?’”

Yet, Assange of Wikileaks says the worse is yet to come.

By James Simpson This article is part of the Organization Trends series. At the time of this writing, prosecutors had...