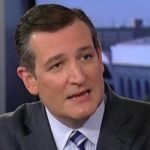 Ted Cruz on of the few left in Washington that backs the constitution and freedom of Americans said to Mike Pence that the only way he would back Trump was if they put out of list of guaranteed Supreme court nominees.

Cruz not even the nominee is still fighting for Americans and conservatism,  Cruz said in order to back Trump he told Pence they have to put out a list guarantee that Trump will nominate a true Conservative to the Supreme court. One of the names on the top of Trump’s list is Mike Lee, the list is strong and we give kudos to Cruz for pushing for such a list.

Pressure is on Hillary if she wobbles, wavers or walks into a Trump right hook, you can start counting her out

By PIERS MORGAN The moment has arrived. This is the biggest and most eagerly awaited showdown the world’s seen since...