With the election only weeks away, Hillary Clinton appears to have the lead and the momentum. As of this writing, the FiveThirtyEight polls-only forecast gives her around an 87 percent chance of winning — up from around 55 percent in late September – and that may not have fully absorbed the fallout of Trump’s lewd video, debatable debate performance or the daily deluge of fresh scandal jeopardizing his candidacy.

But if Clinton doesn’t run away with this, there is another candidate who may also have seen his chances of becoming president skyrocket. The third-most likely person to be the next president of the United States: Evan McMullin. 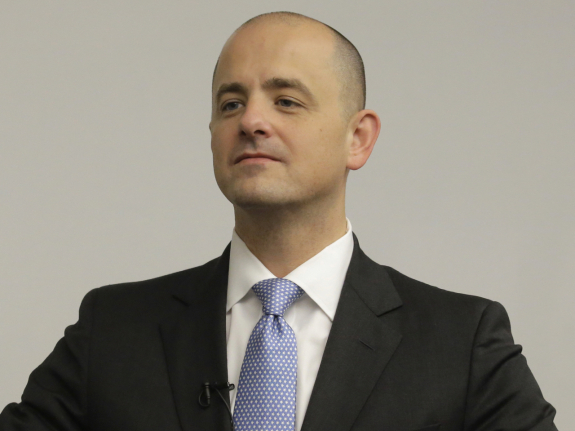 It would take a fascinating scenario — in which much of the technical detail of how we select presidents comes into play — for McMullin to be sworn in as the 45th president, but the chances of its happening are slim, not none. Indeed, his chances of at least making things very interesting may be as high as 1 to 3 percent — about the same as the odds of the Cubs’ coming back to beat the Giants on Monday.

If you’ve never heard of this person, you’re not alone. With #NeverTrumpers failing to get Mitt Romney, Sen. Ben Sasse of Nebraska or any other high-profile Republicans to enter the race, the task to mount a conservative challenge fell to McMullin, a little-known, 40-year-old former CIA officer.

According to the bio on his website, he served in the CIA for about a decade, and spent time in investment banking, as an adviser for the House Committee on Foreign Affairs and as policy director for the House Republican Conference. On the issues, McMullin has taken fairly orthodox Republican positions, including supporting free trade. He has been critical of Trump on immigration, refugees, anti-Muslim rhetoric and on temperament and fitness to be president.

The idea that an independent candidate could swoop in to win has been largely dismissed, on the grounds that any conservative-leaning third-party candidate would be more likely to hurt Trump than Clinton, thus making a Clinton victory more likely. But McMullin may have one advantage that other second-tier candidates do not: Utah.

His path to the presidency basically looks like this:

For step 1, his chances are arguably pretty good. Perhaps there has been no more dire sign that the Trump campaign is struggling than a recent Deseret News poll showing Trump in a dead heat with Clinton in the highly conservative state. But with both major-party candidates getting only 26 percent, the real bombshell is the third-place finisher.

McMullin is already polling within striking distance of the leaders, despite his much lower name recognition. Another recent poll showed McMullin a bit further behind, but with Trump still only getting 34 percent of the vote to McMullin’s 20 percent.

The FiveThirtyEight model has just been updated to include McMullin inUtah (Nate Silver will have more on how we did that), presently giving him a 3.4 percent chance of winning based on current polling, with the “now-cast” giving him a 9.7 percent chance if the election were held today. But there are a number of reasons I’d be significantly more bullish on McMullin’s chances in his home state.

First, McMullin is a Mormon, and while Utah is a deep red state, the heavily Mormon population has not embraced Trumpism. In the Utah Republican Caucuses in March, Trump finished in 3rd place with just 14 percent of the vote.

Meanwhile, in those same caucuses, the candidate whom Mitt Romney announced he would vote for — Ted Cruz — received 69 percent of the vote. It’s hard to overstate Romney’s popularity and influence in Utah, and his endorsement could easily put McMullin over the top. (Oh, and McMullin is reportedly using a Romney email list already.)

And now we get to the heart of the issue: Utah could be enough.

While McMullin essentially has no chance of winning the election outright, Utah’s six electoral votes could be enough to block any candidate from winning 270 in the electoral college, thus sending the election to Congress.

While people speculate about “ties” every cycle, this election may give us our best chance for the equivalent in a long while, though the chances still aren’t good. The model currently puts the chances of a tie at just 0.4 percent— but that is without giving McMullin much of a chance in Utah. Our polls-only forecast estimates about a 1.7 percent chance of Trump’s winning 269-275 electoral votes, including Utah (polls-plus has it as high as 2.4 percent). Any of those would be enough that flipping Utah into McMullin’s column would deadlock the Electoral College.

An interesting point about that number is that it’s relatively insensitive to how far Trump is behind. Of course, a close race would be ideal for McMullin, but the chances of the election finishing within the margin of Utah in late September when it was close were still only around 3.1 percent. Essentially, if the race is close, it’s a narrow band between a clear Clinton victory and a clear Trump victory. But if the race isn’t close, it’s a narrow band in the upper range of possible Trump rebounds. So while the odds of a Trump victory have plummeted, the odds of a McMullin miracle — assuming he wins Utah — remain somewhat steady.

Step 3: Win in the House

The Republican Party, of course, enjoys a significant edge in House delegations and controls 33 of the 50 states. While most project them to lose seats in the election, the scenario we’re interested in — in which Trump rebounds to win nearly half of the electoral votes — would probably not be the disaster it would take for the Republicans to lose nine delegations.

Fortunately for McMullin, Republicans haven’t shown Trump a lot of loyalty. Unprecedented numbers of congressional leaders have already abandoned their nominee – and that’s under the working assumption that Clinton is the only alternative.

Moreover, it takes an outright majority at this stage for a candidate to win. Based on known defections, somewhere around 35 congressmen are already anti-Trump (to varying degrees), including a majority of Utah’s delegation, and a majority of the Republicans in Nevada’s.

So let’s say the Democrats pick up a couple of states in the election, while Utah and Nevada go for McMullin and persuade a few other Republican states to join them right away, such that the breakdowns goes something like – with 26 needed to win — 19 delegations for Clinton, 23 for Trump and eight for McMullin.

Now what? Unlike the Electoral College, the House doesn’t just give up — they get to keep going until Inauguration Day. At that point, if the House delegations are still deadlocked, the vice president becomes president.

Meanwhile, the vice president would likely be known. Since the Senate can only choose between the top two candidates (presumably Kaine and Pence), it would take a perfect tie for them to remain deadlocked.

So here’s the rub: Whichever side loses in the Senate might have good reason to make a deal with a McMullin contingent in the House. That is, if Kaine is VP and the McMullin contingent holds fast, the party-loyal Republican coalition may be pressured to accept McMullin as better than Clinton (who would win if McMullin states sided with the Democrats) or Kaine (who would become president if the House remained deadlocked). While if Pence wins in the Senate, the Democrats may be pressured to accept McMullin rather than Trump or Pence — especially if they make deals for political appointments or legislative commitments. While this may sound shady by U.S. norms, it’s not unlike what happens in parliamentary systems around the world.

The upshot, however, is a bit bizarre. If you’re pro-McMullin or anti-Trump enough that this scenario excites you, congrats. But unless you’re in Utah or other states come into play, there’s not much you can do about it. If McMullin cuts into the Trump vote enough to give Clinton plurality wins in potential red states, her victory is assured.

In other words, if McMullin gets too strong, he could literally cost himself the election. The only route to the presidency McMullin can take must be navigated on the back of a dark horse.

Benjamin Morris researches and writes about sports and other topics for FiveThirtyEight.