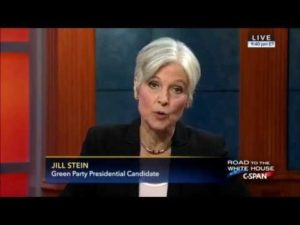 JILL STEIN: It’s important to look at where we are going. It’s not just a moment in time, but where has the strategy of voting for the lesser evil taken us?

All these times you have been told to vote for the lesser evil because you didn’t want the wars, or the meltdown of the climate, or the offshoring of our jobs, or the attack on immigrants, or the massive bailout for Wall Street, but that is actually what we have gotten. By the droves.

The Obama administration, even with both houses of Congress, actually did all of these fossil fuel emissions. “All of the above” gave us some renewable energy but it completely amplified and intensified our carbon production, which has been incredibly destructive to the climate.

The wars have gotten bigger, we are now bombing seven countries.

It is important to not just look at the rhetoric but also look at the track record and the reality is the lesser people and greater people is a race to the bottom, and even Donald Trump in the right wing extremism grows out of the policies of the Clintons, in particular Nafta, which sent our jobs overseas and Wall Street deregulation, which blew 9 million jobs up into smoke.

That is what is creating this right wing extremism. A vote for Hillary Clinton isn’t going to fix it…

It is now Hillary Clinton that wants to start an air war with Russia over Syria by calling for a no fly zone.

We have 2000 nuclear missiles on hairtrigger alert. They are saying we are closer to a nuclear war than we have ever been.

Under Hillary Clinton, we could slide into nuclear war very quickly from her declared policy in Syria.

On the issue of war and nuclear weapons, it is actually Hillary’s policies which are much scarier than Donald Trump who does not want to go to war with Russia.

He wants to seek modes of working together, which is the route that we need to follow not to go into confrontation and nuclear war with Russia.

The US Edges Dangerously Closer to War with Russia: What You Aren’t Being Told

By Darius Shahtahmasebi As hawkish as presidential frontrunner Hillary Clinton may be, the fact the Obama administration is pressing for...