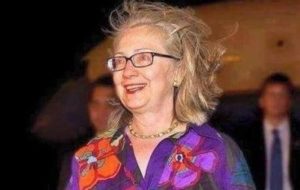 Even the Wall Street Journal is now fed up with the biased media coverage of the 2016 Presidential election as revealed by a scathing article written by Kimberly Strassel, a member of their editorial board.  As Strassel points out, it’s almost impossible to turn on the TV without hearing about Trump’s “lewd” comments while coverage of Hillary “uniformly ignores the flurry of bombshells” inherent in the various WikiLeaks, FOIA releases and FBI interviews.

If average voters turned on the TV for five minutes this week, chances are they know that Donald Trump made lewd remarks a decade ago and now stands accused of groping women.

But even if average voters had the TV on 24/7, they still probably haven’t heard the news about Hillary Clinton: That the nation now has proof of pretty much everything she has been accused of.

It comes from hacked emails dumped by WikiLeaks, documents released under the Freedom of Information Act, and accounts from FBI insiders. The media has almost uniformly ignored the flurry of bombshells, preferring to devote its front pages to the Trump story. So let’s review what amounts to a devastating case against a Clinton presidency.

Of course, the list of Hillary scandals is becoming way to long to remember though one of the biggest has been her establishment of the now infamous private email server and the subsequent intentional destruction of federal records despite the existence of a Congressional subpoena.

Start with a June 2015 email to Clinton staffers from Erika Rottenberg, the former general counsel of LinkedIn. Ms. Rottenberg wrote that none of the attorneys in her circle of friends“can understand how it was viewed as ok/secure/appropriate to use a private server for secure documents AND why further Hillary took it upon herself to review them and delete documents.” She added: “It smacks of acting above the law and it smacks of the type of thing I’ve either gotten discovery sanctions for, fired people for, etc.”

A few months later, in a September 2015 email, a Clinton confidante fretted that Mrs. Clinton was too bullheaded to acknowledge she’d done wrong. “Everyone wants her to apologize,” wrote Neera Tanden, president of the liberal Center for American Progress.“And she should. Apologies are like her Achilles’ heel.”

Clinton staffers debated how to evade a congressional subpoena of Mrs. Clinton’s emails—three weeks before a technician deleted them. The campaign later employed a focus group to see if it could fool Americans into thinking the email scandal was part of the Benghazi investigation (they are separate) and lay it all off as a Republican plot.

By Malia Zimmerman, Adam Housley The decision to let Hillary Clinton off the hook for mishandling classified information has roiled...