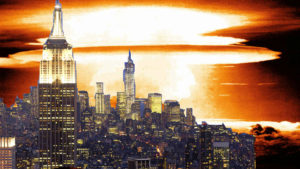 The public are being sucked into the militarist mindset that Russia is the belligerent party, when all evidence points to an American Reich.

Every day the world moves closer to a nuclear winter. The finger on the trigger presses upon the button and only a slight movement will launch unthinkable destruction.

The point that it is so unthinkable yet so close to happening is caused by the overwhelming denial that Americans have towards the real nature of international brinksmanship. The United State foreign policy for global dominance cannot be defended as a righteous imperative. Those who naively believe that NATO occupies the high moral ground are just as confused as the dupes that cheer the dough boys or the GI’s in the previous two world wars.

The difference in the coming end of days is not that the foolish deployments and menacing circumstances are not known, but that the ultimate consequences and inevitable desolation is simply ignored. When a nation is oblivious to the lessons of history and the reality of insane actions, a rational foreign policy becomes the first causality of national security.

Evaluate the titanic failures in the Middle East; Iraq, Egypt, Libya, Turkey, Yemen are well documented as benefiting only a greater ISIS, a stronger Iran and a more bellicose Saudi Arabia.

Yet the major confrontation with Russia over the Syrian civil war has raised the stakes to Armageddon proportions. Of course the international press wants to avoid any serious discussion on the basis of the “so called” authority that the United States has to bomb the Syrian government back to the Stone Age or even more important to deflect that Russia was invited into the conflict by the President of Syria, Bashar al-Assad.

Perpetual warfare without declaring a constitutional war has become the norm in the post World War II environment. No doubt, there will never be a Congressional declaration before the ICBM birds fly. WWIII  is closer to occurring than ever before.

Don’t be sucked into the military-industrial-complex mindset that Russia is the belligerent behind the coming cataclysm. Remember the actual facts about the coup and who was behind the removal of Viktor Yanukovych in Ukraine. Read between the lines in this Washington Postreport: “Ousted Ukraine president warns of civil war, criticizes U.S. for aiding current government.”

“Yanukovych, who read from a statement in Russian and did not take questions, accused the West and the United States of backing fascists in Ukraine — another regular allegation being made by Russian authorities.

“There is a gang of ultranationalists and fascists operating the government,” he said. “I would like to ask those who cover for these dark forces in the West: Are you blind? Have you forgotten what fascism is?”

Do you recall that NATO is encircling Russia with an unprecedented military buildup? Romanian minister: US anti-missile interceptors will be deployed in 2015, and Lithuania aims to spend $115m on air-defense system amid NATO build-up in Eastern Europe and Deployment of U.S. Missiles in Poland Anti-Russian Move – are just a few examples of NATO’s expansion into Eastern Europe with the distinct intention of bringing Russia into the globalist New World Order sphere of domination.

(…) Is this the end results from Obama Firing of Military Reminiscent of Stalin’s Purge or is it a change in military doctrine to employ the George Armstrong Custer battlefield strategy, when taking on the Ruskies? At least Field Marshal Paulus surrendered at Stalingrad. Sounds like Milley will be directing his troops from an undisclosed bunker, while the rest of us incinerate.

If you are still in doubt that the supreme lunacy is upon us, read the detailed explanation about the 8 Alarming Warning Signs That Indicate War With Russia Could Be Imminent.

The brick need not be shattered into an irreversible carnage. But before levelheaded minds can revamp the tensions from failed policies, one needs to understand just what this confrontation is all about. Can the simple minds of a dumb down society face up to reality or are they satisfied to die in a contrived holocaust because the globalist controlled State Department are packed with  NeoCons, who are

Mark 8:18 states it clearly: Having eyes, see ye not? and having ears, hear ye not? and do ye not remember?

Obviously, the public does not see the deception, nor are they able to perceive the falsehoods from the media propaganda, and they certainly do not remember the real nature of the diabolic enemy behind the globalist plan for destroying any nation that opposes capitulation and integration into the New World Order.

Being absorbed into the coordinated assault on Donald Trump, the entire establishment exposes itself to be the obedient enablers of the globalist cabal, hell bent on eradicating any opposition to their rule. If you have not already read, National Referendum on the Globalist Establishment, please do.

Once this staged and rigged theater is over the end result will cast the forces of oppression against the populist sentiment to become independent and sovereign. The military will not be lead by the mythical Brigadier General Jack D. Ripper concerned about maintaining the nationalprecious bodily fluids, but will be commanded by modern day Air Marshal Arthur Harris, who was as much a war criminal as any NAZI SS fanatic.

Humanity is systemically stupid. People simply cannot bring themselves to admit that their society is ruled by dedicated demonic sociopaths. Challenging Russia on the field of war is about as mad as the very MAD strategic nuclear doctrine that the real Dr, Strangelove, Robert McNamara pushed to the threshold of annihilation.

The single most compelling certainty is that Russia has always built their foreign policy around an extensive civil defense network that protects millions of their population. The United States has left exposed their entire civilian population as a conscious decision that millions would inevitably be killed in a full exchange of hydrogen bomb weapons.

Stable, cogent and balanced individuals know these conclusions are true. Regrettably, none of us are in the loop of influencing policy, much less in positions of authority to reverse the unwarranted confrontation with Russia.

General George S. Patton was correct in advocating deposing Stalin and the evil Soviet Union at the end of WWII, but the circumstances are reversed today. Since the end of those international finance inspired hostilities, the American empire has pursued a crusade to do the bidding of theNWO banksters cartel of imperialists. 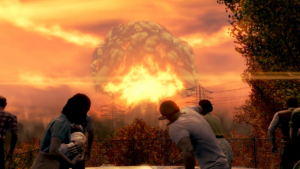 Vladimir Putin Nemesis of the New World Order is the overriding motivation for invoking an absurd cause that can only lead to the unthinkable. The fact that this outcome has now become conceivable if not alluring, illustrates the delusional disease that has taken over the establishment that operates in a fantasy existence of computer simulations and probabilities assessments.

The military planning scenarios played by the Pentagon are infinitely more deadly than playing with the WOPR (War Operation Plan Response) computer in War Games. President Obama, Secretary of State Kerry and an aspiring President Hillary Clinton are certifiably insane to set into motion a warmongering conflict that threatens all of humanity.

The American people are being held hostage to a globalism of destruction. Any country resisting the worldwide monopoly of elite’s dominion must be conquered or destroyed. The United States has already been captured. Now it is time to obliterate both Russia and America to complete the final conquest.