“Only Israel can stop this vandalism…60,000 tombstones in the Mount of Olives Cemetery were desecrated and destroyed, dozens of synagogues were razed, the western wall was converted into a stable…” 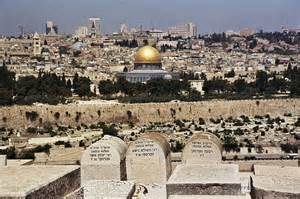 On October 13, 2016 Ynet reported that “The United Nation Educational, Scientific and Cultural Organization (UNESCO) passed a draft resolution on Thursday that failed to acknowledge the Jewish people’s ties to the Temple Mount, raising ire in Israel.

The proposal “strongly condemns the Israeli escalating aggressions and illegal measures against the Waqf Department and its personnel, and against the freedom of worship and Muslims’ access to their Holy Site Al-Aqsa Mosque/Al-Haram Al Sharif, and requests Israel, the Occupying Power, to respect the historic Status Quo and to immediately stop these measures.”

It omits the Jewish name for the holy site—the Temple Mount—and instead refers to it only by its Muslim name—Al-Haram Al Sharif.

…The draft resolution, submitted by Algeria, Egypt, Lebanon, Morocco, Oman, Qatar, and Sudan, will be referred to UNESCO’s executive board for formal approval next week.

…the Israeli Ministry of Foreign Affairs has released a pamphlet of the historical Jewish connection to Jerusalem, which has been distributed to all 120 permanent delegates to UNESCO whose countries have diplomatic relations with Israel.

Prime Minister Benjamin Netanyahu slammed the decision to adopt the resolution, saying “The theatre of the absurd continues with UNESCO and today the organization has made its most bizarre decision by saying the people of Israel have no connection to the Temple Mount and the Western Wall.”

“Obviously they have never read the Bible,” he continued, “but I would advise UNESCO members to visit the Arch of Titus in Rome, where they can see what the Romans brought to Rome after they destroyed and looted the Temple Mount two thousand years ago. One can see engraved on the arch the seven-branched menorah, which is the symbol of the Jewish people as well as the symbol of the Jewish State today.”

The  UNESCO’s guidelines instruct that all UN documents refer to Temple Mount by the Arabic “Haram Al-Sharif” and to the Wailing Wall by the Arabic “Buraq Plaza”. Will they also ban the Hebrew name “Jerusalem” and replace it with the Arabic “Al-Quds”?

David Pryce Jones reported in the National Review “What is it about Jews that compels non-Jews to concoct boundless fantasies about them? UNESCO, the body that is supposed to look after culture for the United Nations, has come up with a magnificent example of these fantasies, decreeing that Jews have no connection with the Temple Mount. One fine afternoon, supposedly educated representatives of their countries find it in them to wave farewell to King Solomon and King David, to the historian Josephus and Herod and the Maccabees, farewell to the Emperor Vespasian and his son Titus, and farewell to Warren and Robinson who excavated the Temple, and farewell to 2000 years of Jewish worship at the Wailing Wall. UNESCO cancels the Wailing Wall altogether, renaming it the Buraq Plaza, after the winged horse that the Prophet Mohammad is supposed to have mounted on that spot. UNESCO can surely find a few witnesses of that ride into the skies. Re-invention of reality on this farcical scale brings to mind a play by the Hungarian Ferenc Molnar in which some dispossessed aristocrats are discussing what is wrong with the world, and one of them says, “It is all Napoleon’s fault, but I have just read a book which proves that Napoleon never existed.” Perhaps UNESCO’s next step is to discover that Jews never existed.”

In Case You Missed It:  Link our rivers: India is heading for a grave floods and water crisis

What the Founders Thought About the Value of a ‘Classical’ Education

The generation that produced the U.S. Constitution lived at a time when liberal education was being rethought, redefined, stretched, and...