This video proves with certainty that Michael Moore may secretly go and vote on the GOP ticket this on November 8th, although he claims publicly that he is not a Trump supporter. 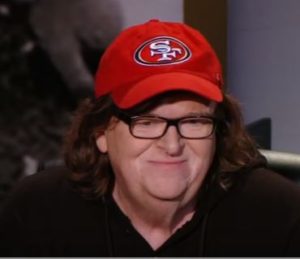 Moore grew up in a blue collar town and his first movies (Roger&Me, The big one) were about middle class/blue collar people vs big corporations and corrupt government (the same people he is referring to here in the video below).

The only reason media are reporting he is a Hillary supporter is because he is aging and washed-up and can’t afford to lose his connections in the business (I know, it is shameful and cowardly) but this segment makes it pretty obvious, considering his passion and emotions, that Michael Moore is telling America to elect.

All of you globalists, Wall Street criminals, CTR and Hillary shills stop the propaganda with the allegations that Moore is anti-Trump. He’s clearly not.

Moore told audience members that he thinks the boisterous GOP nominee is going to win, largely because American elites are so cut off from regular people that they don’t realize just how much the middle class has been harmed in recent years.

“I know a lot of people in Michigan that are planning to vote for Trump, and they don’t necessarily agree with him,” the left-leaning documentarian said.

Many middle- to lower-income people are going to support the former reality TV star because at least he uses language directly pertinent to issues that have affected their lives, Moore argued.

Michael Moore has always wanted to make a difference for the little people, he can see Hillary is tied into the elite, selling us down the river for corporate and self interest, Wikileaks has done more than expose the corruption that lie within a Clinton presidency.

A rare look into an alternative reality where Michael Moore is Speaking positively of a Republican, has hell frozen over?  People are hurting and they may not like Trump but want to watch the political establishment burn for what it has done to the country and world. If you can’t see that then you are blind. Michael Moore is just willing to recognize the truth.

“Trump’s election is going to be the biggest ‘fuck you’ ever recorded in human history — and it will feel good,” Moore argued.

No matter the outcome of the election, the movement has been started in this country and it can’t be stopped. Big changes are coming in the western world.

In Case You Missed It:  Twitter Files reveal social media platform rigged the COVID debate, was complicit in deaths that could have been easily prevented
Posted in Freedoms and tagged Democrats, President Donald J Trump.

Conservatives were right and the liberals were wrong, Obamacare is proving to be a destructive bill costing the middle class...