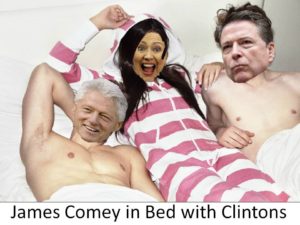 Rush Limbaugh says the FBI is starting a new review of Hillary Clinton’s emails to distract voters from WikiLeaks’s revelations about her.

“[FBI Director James] Comey is just doing this to take everybody’s attention off of the WikiLeaks email dump,” Limbaugh said on his radio broadcast Friday.

“The cynical view is that Comey is still carrying water for Clinton and is trying to get everybody to stop paying attention on the WikiLeaks dump because it’s starting to have an impact,” he continued.

“So you announce you’re opening the inquiry, get everybody all hot and bothered and focused on it, and after three or four or five days, you announce it’s a false alarm, nothing to see her, investigation now officially over, and meanwhile, in that five day period, everybody’s forgotten about WikiLeaks.”

“The WikiLeaks scandal right now is starting to hurt because it is exposing the fraud and the hustling and the collusion and the corruption that is going on at the Clinton Foundation,” he said. “You start messing around with things that are supposed to be charitable to serve humanity, you end up profiting personally from it. That’s easy to understand.

“Everybody knows that’s not nice. Everybody understands that you’re not supposed to get rich off a charity. And the news here is that the Clintons have done that and are doing that,” he added.

The FBI on Friday said it is assessing new emails “pertinent” to its investigation into Clinton’s use of a private email server while secretary of State.

Trump has argued that Clinton jeopardized national security by using a private server. He’s also said the FBI investigation into her email practices did not go far enough.

WikiLeaks, meanwhile, has been steadily releasing batches of hacked emails allegedly stolen from Clinton campaign chairman John Podesta. The Clinton campaign has refused to verify the authenticity of the emails.

INTENSE VIDEO: Footage from inside American Airlines Jetliner on Fire

INTENSE VIDEO: Footage from inside the plane that caught fire in Chicago shows the absolute panic that passengers experienced. We...