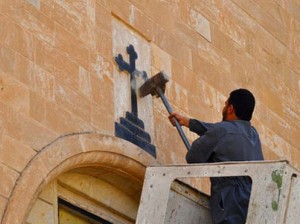 Anyone using sound logic would think that when a country decides to take in refugees from a war-torn area that they would place a higher level of importance on those most at risk of being harmed while at the same time being the least likely to be a threat. But that person would be wrong in the case of how the U.S. is taking in refugees from Syria, raising the question of why such a disproportionately few number of Christians have been brought in as compared to Syrian Muslims.

The question has been raised in the news, but federal appellate court Judge Daniel Manion, in a concurring opinion on a FOIA suit of all places, has seen fit to chastise the administration’s flagrant preference, despite all common sense to grant refugee status to Syrian Muslims over Syrian Christians. From the Daily Signal:

“According to Manion, it is “well-documented” that the refugees are not representative of that “war-torn area of the world.” Ten percent of the Syrian population is Christian and “yet less than one-half of 1 percent of Syrian refugees admitted to the United States this year are Christian.”

President Barack Obama set a goal of resettling 10,000 Syrian refugees in the U.S., and by August that goal had already been exceeded. But of the “nearly 11,000 refugees admitted by mid-September, only 56 were Christian.”

Yet Christian Syrians have been one of the primary targets of the Islamic jihadists infesting Syria and butchering, murdering, and killing civilians. The Islamic State has made it clear that it is going after Christians because it intends to “conquer Rome, break your crosses, and enslave your women.”

Thus, one would expect that Christian Syrians would represent a significant portion of the Syrians being accepted into the U.S. as refugees. But that hasn’t been the case, and, according to Manion, the Obama administration has no “good explanation for this perplexing discrepancy.” Thus, we “remain in the dark as a humanitarian catastrophe continues.”

Perplexing indeed. The only thing one can deduce is that ideological prejudice trumps math.

It is heartening to know that while the Obama administration has failed to use sound logic based on sheer numbers, let alone the fact that there are no Christian members of ISIS that we would need to worry about importing when bringing in Syrian Christians, there are private groups who are stepping in to get Christians out of Syria.

Relief foundations like Glenn Beck’s Mercury One Foundation, through its Nazarene Fund, has resettled more Christians fleeing the Middle East this year than the United States government. This proves once again the conservative contention that private entities are often better and more suited to some tasks.

Despite the lack of transparency from the “most transparent administration in American history” over how Syrian refugees being resettled in the U.S. are being vetted and selected, it’s at the very least nice to see someone in the government sending a message to the Obama administration: You’re doing it wrong.

By Steven Strong with Andy Whiteley Contributing Writers for Wake Up World Scientific evidence refuting the theory of modern humanity’s...