When you thought things could not get any worse for Hillary they do, New emails released by WikiLeaks indicate that Qatar, an Islamist state in the Persian gulf, gave former President Bill Clinton a check for $1 million for his birthday. 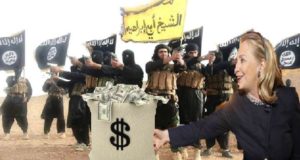 Hillary Clinton was U.S. secretary of state when this payment happened,  she was required to let the agency review new or significantly increased support from foreign governments. Instead she withheld from informing the State Department.

Clinton signed an ethics agreement governing her family’s globe-straddling foundation in order to become secretary of state in 2009. The agreement was designed to increase transparency to avoid appearances that U.S. foreign policy could be swayed by wealthy donors.

If a new foreign government wished to donate or if an existing foreign-government donor, such as Qatar, wanted to “increase materially” its support of ongoing programs, Clinton promised that the State Department’s ethics official would be notified and given a chance to raise any concerns.

The State Department has said it has no record of Hillary Clinton submitting the Qatar gift for review, and that it was incumbent on her to notify the department about donations that needed attention. A department spokeswoman did not respond to additional questions about the donation.

The Clinton foundation has declined to describe what sort of increase in funding by a foreign government would have triggered notification of the State Department for review. Cookstra said the agreement was designed to “allow foreign funding for critical Clinton Foundation programs” to continue without disruption.

This is the same Qatar that funds daesh (ISIS)

The Clinton’s have now firmly established that they are the undisputed world heavyweight champions of corruption. They are more corrupt than Richard Daley, the Teamasters, Teapot Dome, and Tammany Hall combined.

If that was not bad enough, the American people know, but do not seem to care.

Now that is  it’s confirmed… they finally admited to receiving the money…. the law HAS been broken. Will there be punishment? What kind of message will this send, when a person in office, who is now running for the Presidency, has lied & deceived the investigators, the court system, a judiciary panel of Congressmen AND the American public if nothing is done?

Posted in Terrorism and tagged Clinton.

Donald Trump “An Argument For America”