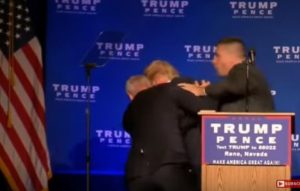 Secret Service agents rushed Donald trump offstage on Saturday evening during a rally in Reno, Nevada after they saw a gunman in the audience who posed a threat to the Republican presidential candidate in a possible assassination attempt.

‘Go! Go!’ agents shouted as they whisked him away and a combination of local police and private security wrestled the suspect to the ground.

Thousands of people scattered like a sea of bodies, screams rang out and authorities dragged the man away as he kicked and strained.

As he returned to his speech, Trump thanked a group of fans near the stage who had stepped in to subdue his would-be attacker.

‘You were amazing, fellas,’ he said.

‘I saw what you were doing. That’s a tough group of people right there… Nobody messes with our people, right?’

In Case You Missed It:  John Fetterman After Giving 5-Minute Speech in PA: “Send Us Back to New Jersey and Send Me to DC For You!” (VIDEO)
Posted in Tyranny and tagged Assassination, Nevada, President Donald J Trump.