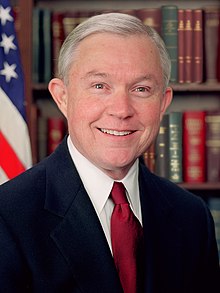 Now that Jeff Sessions is Donald Trump’s pick for attorney general, you’re going to hear a lot of people dig up old accusations that Sessions is a racist. In fact, CNN did so last week. However, between the nature of the accusations and Sessions’s actual record of desegregating schools and taking on the Klan in Alabama, it strains credulity to believe that he is a racist.

These accusations all center around the bruising judicial nomination process Sessions went through in 1986. Ronald Reagan had tapped Sessions to serve on the federal bench and the Senate judiciary committee ultimately rejected him after they heard testimony that he had supposedly called the ACLU and NAACP “un-American” and “communist-inspired,” as well as made racist remarks. The accusations came from Thomas Figures, a black assistant U.S. attorney who worked for Sessions who said Sessions called him “boy” and had made a joke about how he thought the KKK was “O.K. until [he] found out they smoked pot.” Another prosecutor, J. Gerald Hebert, said Sessions had called a white lawyer “a disgrace to his race” for representing black clients.

There is no concrete reason to doubt Figures or Herbert. Sessions vehemently denied calling Figures “boy,” but he didn’t rebut the substance of some of the claims—though he asserted they were taken out of context. It’s not exactly inaccurate to point out that the NAACP and ACLU were “communist-inspired.” He said he thought it absurd to think he would make a pro-KKK joke considering he was prosecuting the Klan at the time he made the remark. And for what it’s worth, Figures also directed accusations at a another assistant U.S. Attorney who worked with Figures. That assistant U.S. Attorney also said Figures wasn’t telling the truth and defended Sessions’s integrity. Ultimately, the charges were no more than hearsay.

However, it’s worth noting that Senator Ted Kennedy, on the Senate judiciary committee at the time, seemed heavily invested in tanking Sessions nomination. The next year, Kennedy’s crusade was to sink Robert Bork’s nomination to the Supreme Court, which has generally been regarded as a shameful smear campaign ever since. The episode upended the comity that had previously existed between the Senate and the White House on Supreme Court nominations—Antonin Scalia was approved to the court 98-0 the year before, the same year that Sessions was filleted by Kennedy and Democrats on the judiciary committee. Perhaps Sessions was a trial run for “Borking.”

In 2009, Sessions himself told me that “When I got to Washington, there had been an orchestrated campaign to smear my record, and it was executed with great care. And I, frankly, was a babe in the woods and wasn’t sufficiently prepared for it.” For that reason, when Sessions got to the Senate he has always been more deferential toward nominations than most of his GOP colleagues. For instance, he was one of the only Republican senators to support Eric Holder’s nomination for attorney general.

Sessions’s actual track record certainly doesn’t suggest he’s a racist. Quite the opposite, in fact. As a U.S. Attorney he filed several cases to desegregate schools in Alabama. And he also prosecuted Klansman Henry Francis Hays, son of Alabama Klan leader Bennie Hays, for abducting and killing Michael Donald, a black teenager selected at random. Sessions insisted on the death penalty for Hays. When he was later elected the state Attorney General, Sessions followed through and made sure Hays was executed. The successful prosecution of Hays also led to a $7 million civil judgment against the Klan, effectively breaking the back of the KKK in Alabama.

As a U.S. attorney, he also prosecuted a group of civil rights activists, which included a former aide to Martin Luther King Jr., for voter fraud in Perry County, Alabama. The case fell apart, and Sessions bluntly told me he “failed to make the case.” This incident has also been used to claim that Sessions is racist—but it shouldn’t be. The county has been dogged with accusations of voter fraud for decades. In 2008, state and federal officials investigated voter fraud in Perry County after “a local citizens group gathered affidavits detailing several cases in which at least one Democratic county official paid citizens for their votes, or encouraged them to vote multiple times.” A detailed story in the Tuscaloosa News reported that voting patterns in one Perry County town were also mighty suspicious in 2012: “Uniontown has a population of 1,775, according to the 2010 census but, according to the Perry County board of registrars, has 2,587 registered voters. The total votes cast thereTuesday—1,431—represented a turnout of 55 percent of the number of registered voters and a whopping 80.6 percent of the town’s population.”

Perhaps there are a lot of ideological reasons for liberals to be upset about Sessions becoming attorney general. But I don’t think the character attacks on the man can be taken seriously.

Correction: A previous version of this post identified Henry Francis Hays as an Alabama KKK head. He was actually the son of one: Bennie Hays, who, per his obituary, was accused of “instigating” the murder for which Henry Hays was executed. The story has been updated.

Why Jeff Sessions, ‘an Advocate for the Constitution,’ Has Conservatives So Excited

As attorney general, Jeff Sessions could go a long way toward reversing the politicization of the Justice Department that occurred...