The Broadway hit of Hamilton Brandon Dixon, who plays Aaron Burr, addressed Pence after the curtain call, saying the diverse cast is anxious of Trump and worried about racism, saying this while they practice bigotry and racism themselves. 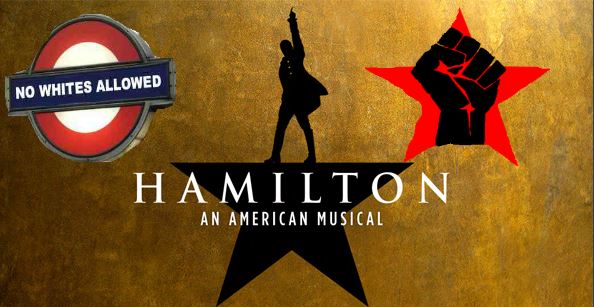 The bigoted crowd continued to mock Pence throughout the performance, including during the song “Yorktown,” when Alexander Hamilton and Marquis de Lafayette sang “Immigrants, we get the job done.” They high-fived each other as the audience cheered.

Although this same group of people in the performance have recently been promoting discrimination and racism toward white people.  As they call on Trump to be fair, they “The Hamilton cast”  literally are practicing racism and hate, as typical fashion from leftist hypocrites.

The hottest show on Broadway is also the most racist show on Broadway. It has won praise for its groundbreaking casting of black and Latino performers, but now, “Hamilton” has run afoul of the strict New York City Human Rights Laws against racism.

Hamilton takes a story that “valorizes dead white guys” and replaces it with black, Latino and multi-ethnic performers playing America’s founding fathers, but it gets worse,  white people do not bother coming to a casting call, your not welcome, why?  Your skin tone is too light, something that leftist racist are to infatuated with, skin tones.

The blockbuster musical looks to expand to other cities. The  shocking ad is an open and unashamed casting notice with its call for “non-white” performers made many uncomfortable,  of course their racist ad is also very problematic to civil rights attorney Randolph McLaughlin.

So as these bigots call on the Trump administration to be fair, while they are openly practicing bigotry and racism themselves.  perhaps they should look in the mirror?

Imagine if they put an ad out that said, ‘Whites only need apply?’” said McLaughlin, of the Newman Ferrara Law Firm. “Why, African-Americans, Latinos, Asians would be outraged.”

McLaughlin said the ad violates the New York City Human Rights Law, which makes it unlawful “for an employer… because of the actual written or perceived… race of any person, to discriminate.”

“You cannot advertise showing that you have a preference for one racial group over another,” McLaughlin said. “As an artistic question – sure, he can cast whomever he wants to cast, but he has to give every actor eligible for the role an opportunity to try.”

That is also the policy of Actors Equity, the Broadway union, which says, “…producers agree that auditions for all productions… will be conducted in such a manner as to provide full and fair consideration to actors of all ethnicities.”

Has the left lost its mind,  it excuses racism and openly practices it?  The same Democratic party that promoted racism in the 1960 is up to its old dirty tricks,  it appears the Democrats just cannot learn to treat everyone as equals.

If the Hamilton cast is serious about “equal” rights for all, its time they look at their own groups and start putting what they preach to actual work.

Americans are not worried about Trump, they are worried about racist groups like this, so lost in their bullshit of racism they cannot even see how wrong they are, in their own leftist demented heads this is justifiable.

Racist bigot and Producer Jeffrey Seller  doubled down on his racism and defended his racism, calling it the diversity of the “Hamilton”, he said he thinks their“non-white” casting notice is legal and fair.  (sic)

“I stand by it and believe it to be legal,” he said.

The city Commission on Human Rights said it has not received a complaint about the ad, and would not say if it is investigating.

In recent years, the city has fined restaurants for advertising for “busboys” and “waitresses” instead of “bus help” and “wait staff.” In this case, a source told CBS2’s Aiello the commission would likely work with the “Hamilton” production team to help it comply with city law and force them to stop discriminating against people based on skin tones.

Do You Understand the Electoral College?

Do you understand what the Electoral College is? Or how it works? Or why America uses it to elect its...