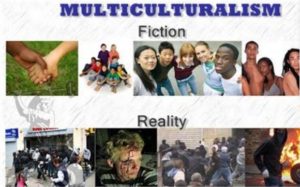 Every country carries an “ethos” or philosophy about itself.  That ethos runs through the core of its being.  That ethos drives its laws, its actions, its history and its future.

That ethos runs through the hearts, minds and souls of its citizens. Ethos creates the individual and national ‘bonding’ that maintains the ‘glue’ of what it’s like to be a citizen of a country.

Today, through the efforts of Congress and Barack Obama, America’s national identity stands in the hangman’s noose and the Guillotine’s clutches.

For the past 51 years, Congress forced over 100,000,000 (million) legal immigrants from 190 countries with 190 different religions and with 190 different cultures along with 190 different worldviews to saturate America with multiculturalism and diversity.  Congress allowed 15 to 31 million illegal alien migrants to cross over our borders and remain in our country in violation of our laws.

If you look at parallel societies created in Detroit, Michigan with the Muslim juggernaut or the Mexican contingent of La Raza taking over southern California, New Mexico, Arizona and Texas—you witness the fundamental changing of America’s successful ethos that will eventually end up like Lebanon’s or Germany’s or Sweden’s or the United Kingdom.

The great philosopher Emanuel Kant said, “The two great dividers of any civilization are religion and language.”

Simply said, if you morph a country into different languages and religions, you create ultimate fragmentation.  That historical fact runs true whether you witness Muslims breaking off from Hindu’s and Buddhists in India to form Pakistan, or, one look at Lebanon shows bombings and chaos among its diverse religious and language groups—forced upon that country formerly known as the “Switzerland of the Mediterranean.”

Some 35 years ago, a Frenchman Jean Raspail, angry that the French president began importing Muslims from Africa and the Middle East wrote a book, Camp of the Saints, which proved terribly clairvoyant.  He spoke of a vast armada of poor people having destroyed the ecology of their own countries, sailed toward France to be saved from starvation, human misery and suffering.

He wrote one alarming scenario after another.  One of the leaders of the poor spoke to a captain on one of the ships, “You don’t know my people—the squalor, superstitions, the fatalistic sloth that they have wallowed in for generations.  You don’t know what you’re in for if that fleet of brutes ever lands in your lap.  Everything will change in this country of yours.  They will swallow you up.”

Today, you see Black Lives Matter attempting to have all police officers executed as they demonstrate and chant through the streets of America.  You see Mexican patriots waving the Mexican flag as they parade proudly screaming, “This is Mexican land and it will be Mexico again.”  You see Detroit, Michigan and Miami, Florida being turned into Islamic caliphates.  Already, the U.S. Defense Department keeps an eye on 22 confirmed Islamic training terror camps within America from New York to Oregon.

Already in America, we see female genital mutilation of all Muslims girls in America; we see honor killings of women and daughters by fathers and sons; we see arranged marriages of little Muslim girls to much older men; we see Muslim tension toward gays and we see Muslims pushing their way into the White House staff with no less than 10 advisors. One of those aides, Muhammad Magid pushes for the installation of Sharia Law in America under the direction of Barack Obama.

Next, language forms the foundation of any civilization. Without a single, cohesive language, which everyone speaks, we see conflict.

In New York City, with nearly 40 percent foreign born out of 8.3 million, that city features 800 different spoken languages within its city limits.

“The tie of language is the strongest and most durable that can unite mankind,” said Tocqueville.  “It also can fragment any society faster than war if two different languages compete.”

Latinos grow to 51 percent by 2042 in America. Watch for the English language to degrade into Spanish.  In places like Detroit, Michigan where Arabic dominates in 2016, look for complete and total separation of Muslims against Americans. You will not see anyone fly Old Glory or repeat the Pledge of Allegiance to America anywhere in Detroit under Muslim domination.

“Islam isn’t in America to be equal to any faith, but to become dominant. The Qur’an should be the highest authority in America, and Islam the only accepted religion on Earth.” Omar Ahmed, director of Council on American Islamic Relations.

On Monday, November 28, 2016, at Ohio State University campus, a Somali Muslim drove into a crowd of students, jumped out and stabbed nine people in a fit of Islamic rage.

As former Governor Richard D. Lamm of Colorado said, “We are the only country in history that deliberately changed its ethnic makeup, and history has few examples of “diversity” creating a stable society.”

Obama continues with his promise to fundamentally change America’s demographics.  No less than 7,000,000 (million) Syrians have applied to come to the U.S. as “refugees”….

If we fail to stop mass immigration into America, that extra 100 million third world immigrants cannot help themselves, their languages, their cultures and their behaviors—that diametrically oppose Western thought, Western governance and Western reason.

We force our kids into a hell of a self-inflicted, devastating destiny.

“You don’t know what you’re in for if that fleet of brutes ever lands in your lap.  Everything will change in this country of yours.  They will swallow you up.”

In Case You Missed It:  Rep. Bobby Rush Of Illinois Is 24th Democrat To Announce He Is Not Running For Reelection In 2022
Posted in Tyranny and tagged Multiculturalism.