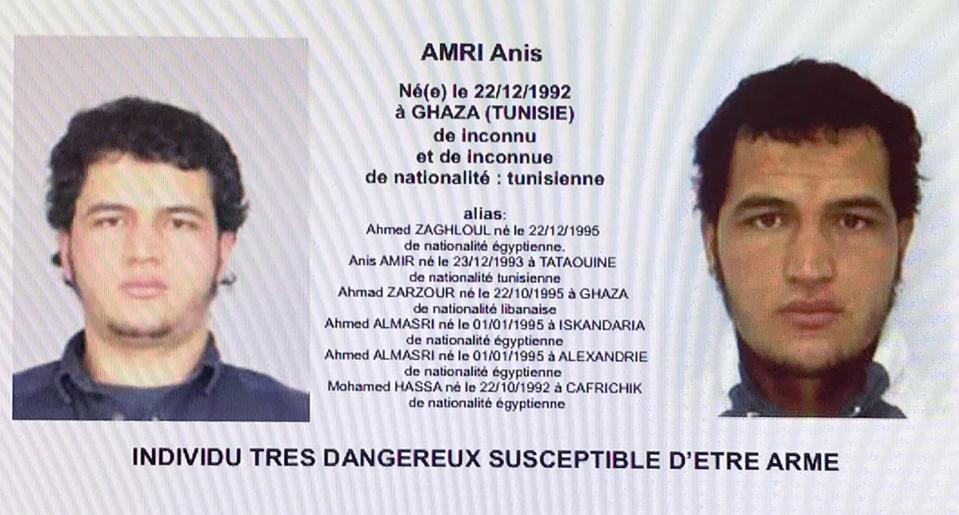 Anis Amri was arrested three times this year and his asylum application was rejected, but deportation papers were never served and he disappeared.

A European arrest warrant from Germany, indicates that Anis Amri has at times used six different aliases and three different nationalities. German police were tracking him for months amid fears he was involved in an earlier terrorist plot – but lost him before the Berlin Christmas market massacre.

The Tunisian radical was known to be a supporter of Islamic State and to have received weapons training.

He tried to recruit an accomplice for a terror plot – which the authorities knew about it – but still remained at large.

It also emerged that he served four years in an Italian jail after he set fire to a school.

Prosecutors launched an investigation against him in March after receiving information from federal security agencies that he was planning a break-in to finance automatic weapons for an attack, prosecutors told the Associated Press.

Surveillance caught him dealing drugs in Berlin and being involved in a bar fight, but nothing substantiated the original warning and authorities stopped watching him in September.

Police planned to raid refugee accommodation in Emmerich – home to around 50 asylum seekers – but had to wait hours due to a typing blunder on warrant papers, according to German news site RPonline.

Earlier reports claimed police commandos had raided two apartments in Berlin, but the city’s police denied this on Twitter, dismissing it as “rumours”.

Official documents that would have allowed authorities to boot Amri out of Germany and back to native Tunisia are understood to have arrived just hours ago.

But a wrangle with Tunisia over his passport saw him remain in the country for several months longer, the Wall Street Journal reports.

Spy chiefs had been monitoring Amri since his original asylum application was rejected back in June – as it emerged he had been arrested three times this year.

Paperwork finalising the extradition only arrived today – days after 12 people were killed when a juggernaut he was believed to have been driving ploughed into the Berlin market.

Amri’s father also revealed he spent four years in an Italian jail after burning down a migrant reception centre, reports The Times.

And he was also convicted in his absence of aggravated theft with violence and sentenced to five years behind bars in his home country, according to Tunisian local radio.

Earlier anti-terror cops were frantically hunting for him near the border town of Emmerich.

German police have obtained a European arrest warrant for the 24-year-old and placed a £90,000 bounty on his head, Associated Press confirmed.

Documents belonging to Amri were found in the cab of the juggernaut used to kill 12 people on Monday night.

And shocking revelations emerging this evening show spy chiefs had been monitoring him for months.

North Rhine-Westphalia Interior Minister Ralf Jager said: “This person attracted the attention of various security agencies in Germany because of contacts to a radical Islamist milieu.”

He had also been arrested three times, once in July for a knife fight in a row over drugs.

His subsequent arrest for GBH saw him disappear from police radar before the case reached trial.

The revelation is likely to raise serious questions about the German authorities’ surveillance of Amri, who was a disciple of Abu Walaa – one of Germany’s most notorious Islamist preachers.

Amri was linked to Walaa, who was arrested in Hildesheim last month for recruiting radicals into the ranks of ISIS.

The group he led were arrested in the North Rhine-Westphalia and Lower Saxony regions over allegations they helped fighters travel from Germany to Syria to join the death cult.

Tunisian Amri is known to police over an assault allegation but is thought to have gone underground before charges were pressed.

He was arrested in August and found to be in possession of a fake Italian passport, after which his phone was monitored until he disappeared earlier this month.

Amri is thought to have used six different aliases and three nationalities.

He had moved to Germany last year and was granted temporary asylum when an initial bid for permanent residency was rejected.

The manhunt switched to western Germany this afternoon as police launched an operation at a migrant centre in the border town of Emmerich where Amri lived.

German newspaper Der Spigel earlier reported that ID belonging to the suspect was found in the footwell of the truck that was used to kill 12 people.

They are thought to be working on the premise he was injured in a life-or-death struggle with the lorry’s murdered Polish driver after his blood was found in the cab.

One chilling theory emerging today suggests he could have posed as a victim of the attack in a bid to make his escape.

Lawmaker Stephan Mayer sniped: “There is clearly a connection between the refugee crisis and the elevated terror danger in Germany.

“The identity of this Tunisian also underlines this, since he clearly entered Germany through Italy in the context of the refugee crisis.”

Cops had earlier botched their hunt for the terrorist behind the attack by arresting a man who had accidentally jumped a red light.

The Pakistani refugee was taken into custody after being singled out for the minor traffic offence a mile down the road from the atrocity.

He was released from custody last night when cops found no blood or gun residue on him.

And today as sheepish police conceded they have given the real killer an 18-hour head-start, they admitted: “We cried hurrah too quickly.”

by Tyler Durden After a violent trifecta of a day, in which terrorist attacks left at least 9 dead and...