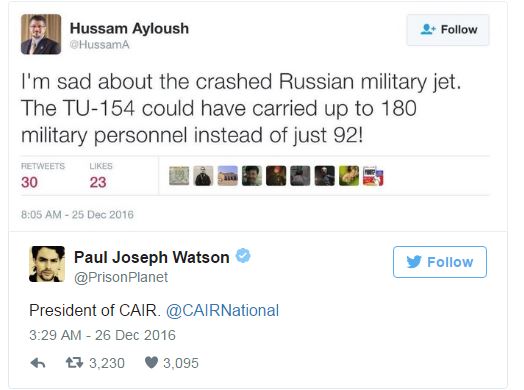 In a shocking tweet the so called moderate Council on American-Islamic Relations (CAIR) Executive Hussam Aylouch celebrated the death of the Russian Jetliner crash, wishing there were more people on board.

This is the typical sick attitude of these pagan hateful Muslims.  Sadly this guy is a leader in the organization that represents millions of Muslims in the USA.

This U.S.-based pro-Muslim group that enjoys close ties with the Obama administration has also landed on one Arab nation’s list of terrorist organizations.

The Council on American-Islamic Relations (CAIR) was one of 82 groups around the world designated terrorist organizations by the United Arab Emirates, placing it in the company of Al Qaeda, Islamic State and others. While CAIR has previously been linked to Hamas, it has held hundreds of meetings with White House officials on a wide range of community issues and has sought to present itself as a mainstream Muslim organization.

President Barack Obama is using his executive power to issue a broad swath of environmental protections during his last weeks...