These last 30 days of Obama’s Presidency he will probably work more than all his past years combined in revealing his true disdain for his own country and his childish mentality which can’t help but act. Although he has just three weeks left in office, Obama has pursued an aggressive slate of foreign policy moves, environmental rules and executive orders in a desperate attempt to tie up Trump.

Mass pardons and computations and last minute gitmo transfers, stabbing Israel and Russia in the backs and like a spoiled. child anything to piss off the no to Obama legacy voter.

Stabbing Israel in the Back

Obama is now working with the Palestinians against Israel at the UN, fomenting more hate and only God knows what else against the Israelis in a 12 hour surprise where Obama and Kerry showed their true colors, abstaining from a vote that demands that Israel “immediately and completely cease all settlement activities in the [so-called] occupied Palestinian territory, including East Jerusalem.” It also advised all states “to distinguish, in their relevant dealings, between the territory of the State of Israel and the territories occupied since 1967”—what former Israeli Prime Minister Ariel Sharon called “Auschwitz borders.”

Trump has criticized the Obama’s decision to abstain from a UN Security Council condemning illegal Israeli settlements in the West Bank, allowing the resolution to pass.

Trump on Wednesday continued to criticize the UN abstention, reiterating an earlier pledge that things would be different regarding Israel after he takes office next month. 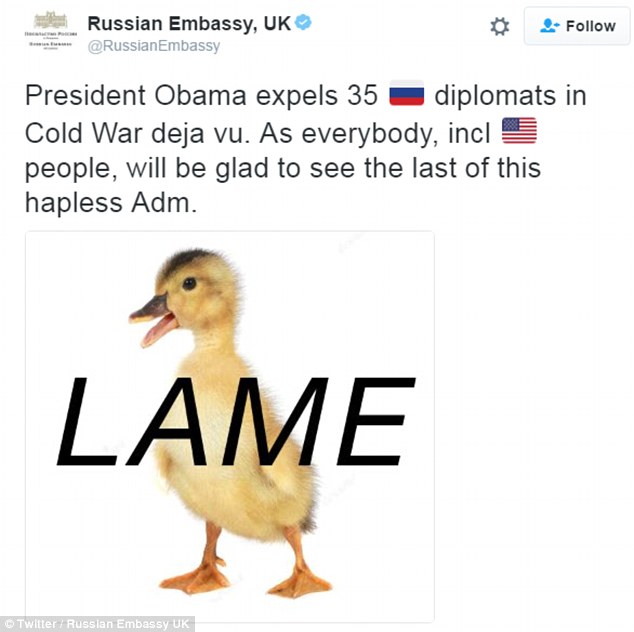 Now Obama is heating up the cold war and trying to antagonize Russia, Obama is kicking out 35 Russian diplomats from the country’s embassy in Washington, DC and consulate in San Francisco ‘persona non grata’ – giving them 72 hours to get out of the country.

The Obama administration wants to slap Russia with new sanctions for allegedly interfering in the 2016 election, President-elect Donald Trump said the US needs to “get on with our lives,” as nobody knows exactly what’s going on.

A senior Donald Trump aide speculated on Thursday that President Barack Obama’s move to sanction Russia over election-year hacking allegations could be, in part, a political move designed to tie the president-elect’s hands as he takes office.

There is also speculation Obama through the CIA took down the Russian Military jet last week. A CIA Radio Electronic Attack may be behind what downed the Russia TU-154 December 25, 2016.

So far Putin has not taken the bait from Obama, and said they will wait out until Obama is out of office in a few days and called Obama a Lame Duck president and political corpse. Trump commended Putin on them waiting in this tweet:

Great move on delay (by V. Putin) – I always knew he was very smart!

The founder of Drudge Report got a very unpleasant surprise from Obama on Thursday night when the conservative news aggregation website went down for 90 minutes.

He also stated that the ‘routing and timing’ of the attack was ‘VERY suspicious,’ which then led him to tweet: ‘Is the US government attacking DRUDGE REPORT.

Obama used the 110-year-old Antiquities Act this week to unilaterally declare the existence of two national monuments this week in Utah and Nevada, angering Republicans in both states who see it as a land-grab inked without any consultation.

‘[This] midnight move is a slap in the face to the people of Utah, attempting to silence the voices of those who will bear the heavy burden it imposes,’ Utah Rep. Jason Chaffetz said Wednesday in a statement

Trump Says Obama Trying to Box him in

The administration of US President Barack Obama is not facilitating a smooth transition of power, President-elect Donald Trump said on Wednesday.

Doing my best to disregard the many inflammatory President O statements and roadblocks.Thought it was going to be a smooth transition – NOT!

Kellyanne Conway reacted in a Fox News Channel interview report that Obama’s moves ‘appeared intended to box in President-elect Trump, who will now have to decide whether to lift the sanctions on Russian intelligence agencies when he takes office next month.’

Conway ‘I hope that this isn’t motivated by politics even a little bit.’

She said she was referring specifically to ‘the allegation or the supposition that perhaps one reason that the sanctions are taking place is to “box in” President-elect Trump, forcing him to take a position or otherwise once he takes office.

Responding to Obama’s new Sanctions for  Russia  for allegedly interfering in the 2016 election, President-elect Donald Trump said the US needs to “get on with our lives”.

CNN ran a fake news story of its own when it claimed that Russia was closing an Anglo-American school in Moscow as retaliation for President Obama’s sanctions.

“Russian authorities ordered the closure of the Anglo-American School of Moscow, a US official briefed on the matter said. The order from the Russian government closes the school, which serves children of US, British and Canadian embassy personnel, to US and foreign nationals,” reported CNN.

However, Russian Foreign Ministry Spokeswoman, Maria Zakharova responded swiftly by confirming that the school had NOT been closed.

The misreported story is an embarrassment for the network, which has run a series of articles over the past month complaining about so-called fake news.

What else will the childish Temper Tantrum Obama do in the final three weeks?  We will hold our breaths and see.

Obama needs to understand that his time is over. Nobody wants him doing anything!

Obama needs to know he  has been a disastrous Democratic party leader. On his watch over a 1000 elected Democrats lost their seats.

With this politically stupid recent moves against Russia and Israel, Obama has also handed Trump and the GOP leadership an excellent issue with which to hammer the Democrats in the House and in the Senate.

Obama has now put at political risk over 10 vulnerable Democratic Senators up for re-election in 2018 in states won by Trump, thus ensuring a post 2018 GOP controlled and filibuster-free Senate.

WikiLeaks have suggested that murdered DNC staffer Seth Rich leaked the Clinton and Podesta emails, and not Russian hackers as...