While the left, especially President Obama himself, spreads the lie that the economy is doing great, Macy’s is to cut 10,000 jobs. So, Macy’s, how are Obamanomics working for you?

Barack Obama is supporting efforts by liberal state legislators across America to raise the minimum wage to $15/hour. This is additional pressure that America’s struggling businesses don’t need when they are already trying to manage the devastating effects of Obamacare.

Now, department store Macy’s has had enough of the devastating effects of Obamanomics. They are being forced to shut down more than 100 stores and lay off thousands of workers. This is what Obama’s America looks like.

The so called “Obama recovery” is not working out as well as the media has sold us. Remember when the leftist  cheerleaders said that holiday sales were expected to be far stronger than usual under Obama, Well, at least when it comes to conventional retailers like Kohl’s and Macy’s… not so much.

First, it was Kohl’s, which announced it was slashing its full year forecast, and now sees FY2017 adjusted EPS of $3.60-$3.65, down from $3.80-$4.00 less than two months ago, in the day after the election (ronically). It wasn’t just the future: the company revealed that comp sales were also down 2.1% y/y in fiscal months November and December combined.

Terry J. Lundgren, chief executive of Macy’s, said the company “had anticipated sales would be stronger.”

“We believe that our performance during the holiday season reflects the broader challenges facing much of the retail business,” he said in a Wednesday statement.

Macy’s communications team understandably wants to focus on internet competition. But the most expensive cost of any business is labor, and heavy-handed regulations have made it impossible for Macy’s to be profitable in many Democrat-run states.

Macy’s and Khol’s are not the only retailers cutting back in the aftermath of 8 years of Obamanomics. On Wednesday, Sears said it planned to close 150 locations, 42 of its namesake stores and 108 Kmart stores.

8 years of “Fundamentally changed America” and we see the result: Destruction of the middle class consumer due to massive job looses and zero yield on savings accounts, good middle class jobs replaced with low wage jobs under Obama’s false recovery.

These locations will also close, all of these locations opened in the 1960’s been around for 5 decades and made it thought many presidential administrations.  They could not survive in Obama’s socialist environment and after years of success they will be closings. RIP

The most shocking of all closings, this Macy’s location opened in 1902 and Theodore Roosevelt was president, yet Obama made sure his promise of “Change” happened and they could not survive Obamanomics.

After 8 years of Obama: 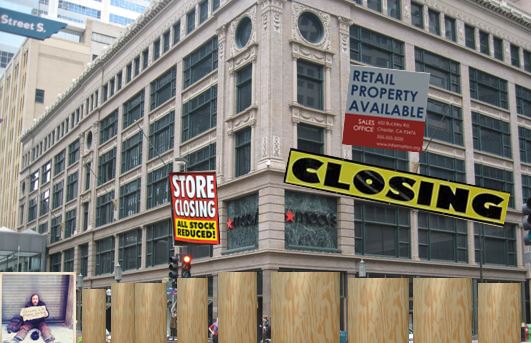 In Case You Missed It:  Bidenomics: US To Totally Collapse after Dollar Collapses
Posted in Financial and tagged Democrats, Financial, Obamanomics, Recession.