The leftist liberals have lost their mind with the now extreme peddling of Sodomy using children to sell their sickness. When the Devil realized that he could not dethrone God, he sought to devalue Man.

The boy, who is apparently transgendered, is seen wearing the gag after burning his tongue licking a hot grill at a Benihana style restaurant in exchange for $1,000 from his older teenage brother.

The FOX show is named “The Mick” and it aired on January 1st, 2017. It was created by Dave Chernin and John Chernin, both sons of top Hollywood executive Peter Chernin.

Other scenes show the boy dressing like a girl and commenting how the dress he’s wearing “kind of breezes on my vagina.” 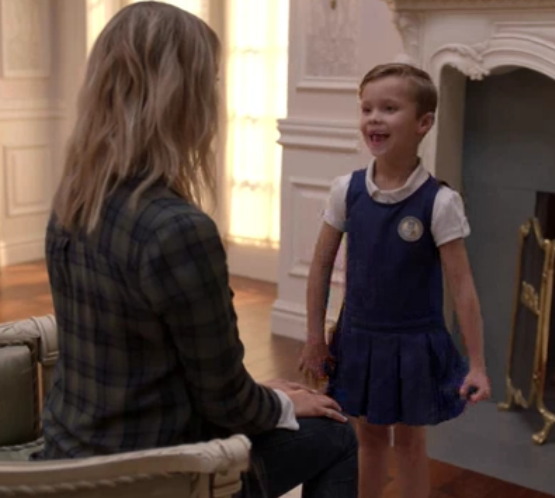 Another scene shows the boy celebrate after a man’s eye is impaled in front of him by a woman’s high-heeled shoe.

As blood is shooting on the boy’s face and clothes, he exclaims, “cool!”

Another forced scene highlighted by Newsbusters shows one of the characters awkwardly praising Planned Parenthood, plugging how they provide “health care to over three million women in this country.”

While Sam Hyde’s show was canceled from Adult Swim for jokes vaguely referencing the alt-right, utter filth like this is aired during prime time on FOX.

That’s what the gay rights movement was all about until the early 90s. They stopped publicly supporting NAMBLA because they realized they would never win with that albatross around their necks. The public was starting to sympathize with gays, but not pedos. So they had to change their approach.

Homosexuality was once unthinkable and unacceptable. Wait a few decades and voila! Gay marriage and gay “rights.” Since they’ve gotten this far without significant pushback – why not graduate to pedophilia, which was their real intention all along?

You’re being acclimated to accept and embrace pedophilia through “journalism” and entertainment. They’re going to keep pushing now that they’ve won the culture war.

Rep. Dave Brat, R-Va., has introduced a bill in the House that, if passed, will allow individuals to decide how...