A HUNT is underway for a Muslim Migrant who was plotting a chemical attack on a British seaside town. 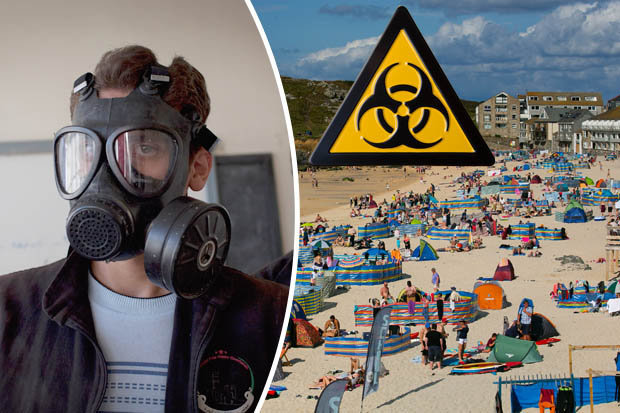 The plan was uncovered by German police who stumbled across documents as they searched a refugee camp for the Berlin truck Islamic terrorist whom drove a large truck through a Christmas market.

These detailed chemical agents and the names of British towns. But the muslim suspect, aged in his early 30s, had disappeared and it is feared he could now be in the UK.

Sources say he was trained in toxins and is a Syrian scientist, he was being tracked by US agents before giving them the slip.

The news emerges just days after security minister Ben Wallace warned Britain to prepare for a “mass casualty attack” which may involve chemical weapons. Last week, Britain’s most senior fire chief warned that the potential for a terrorist chemical attack in the country is a “huge concern”.

The alarm was raised on December 20, when counter-terror police raided Berlin’s defunct Tempelhof airport, now the site of the country’s largest refugee camp, following the Berlin terror attack on the previous day.

As more than 250 officers ransacked the camp in their search for the attacker, they discovered a document with details about a separate plot in Britain.

The document, which was partially charred, contained details of chemical agent and listed two English towns.

The contents were of such significance that MI5 were immediately contacted,” said an intelligence source last night.

Security services were last night scouring both targets, one of which was described only as “a seaside on town on the south coast”.

British Intelligence sources confirmed they had already been warned by US counterparts about the possibility of a Syrian scientist entering Europe as a refugee committing Islamic terrorism.

US spies had been tracking the terrorist suspect after he left Damascus. However, the trail went cold.

However, the camp discovery showed he had travelled further into Europe than had been previously thought.

Last night officials with Germany’s Ministry of the Interior said: “We can neither comment on ongoing investigations nor on the details of our intelligence services’ operations.”

It is believed that he has either gone rogue and is now working for fundamentalist Islamic terrorist groups against Assad.

The scientist is not thought to have any covert training, fuelling the belief that he is arranging to meet sympathisers already in Europe that used the Migrant crises to gain enrty.

“Our US counterparts have been instrumental in tracking this individual. I can say that the net in closing in,” added the source.

It is feared that his chemical expertise goes far beyond the homemade Chlorine-based mustard gas used by IS in the past.

People think that London is the only target, but it isn’t. Provincial towns are a must easier and more effective target, – and all the expertise for this type of attack is in London, so attacking a town outside the capital would carry a greater chance of success said Col Hamish de Bretton-Gordon.

“Just imagine the effect of an attack in Westquay, in Southampton, with 50,000 shoppers, a football stadium or even a busy commuter train. A department store with a couple of hundred people would be just as effective.”

Europeans were warned by I.S.I.S that they’re fighters would slip into Europe under the false guise of being migrants, why did nobody take notice?? France , Germany and now Britain will and have paid the price for Lilly livered thinking.

About time our government came clean about the migrants and the serious implications they bring to Europe. Look at cities like Aleppo, Raqqa, Mosul and the chaos and destruction, it is obvious hardly any records have survived, so it is impossible to check peoples background. If they are serious about keeping us safe, the best thing to do is deny entry to all Muslims coming from war-zones.

Trump: US Intel Has ‘Absolutely No Evidence’ Of Hacking

US President-elect Donald Trump stated on Saturday that the US intelligence services "stated very strongly there was absolutely no evidence"...