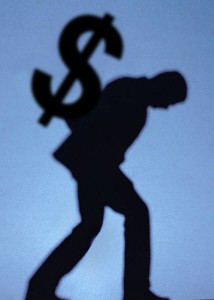 Sens. Ted Cruz and Marco Rubio have been adamant – the federal debt is way too high and has got to be tamed fast.

Cruz, a Republican from Texas, helped lead the 2013 fight against raising the debt limit, a fight that resulted in a partial government shutdown. Rubio, a Republican from Florida, in announcing his plans for this year, said Tuesday that “one major thing that will cost us jobs and hamstring our economy is our rising debt.”

So why did they and 49 other Senate Republicans vote this week to consider a measure that says the “appropriate levels of the public debt” would rise from the current $20 trillion to $29.1 trillion in 10 years? And predict deficits of $1 trillion by the end of that period?

Because, they said, it’s the first procedural step in repealing Obamacare. And they insisted the number is meaningless.

“The resolution is designed for one purpose only, to serve as a vehicle to repeal Obamacare,” said Cruz.

The wink at the apparently ballooning debt was very different from how conservative Republicans have proceeded in recent years. They made debt reduction a centerpiece of presidential campaigns. And they vowed to never give in, even defying their own party leaders.

So what about the big debt? That will come later, Cruz said. “We intend to have a vigorous debate later this summer on a budget for the next fiscal year that addresses the enormous threat our deficit and debt poses,” Cruz said.

Rubio was not available for comment. His press secretary, Matt Wolking, pointed to a letter Cruz, Rubio and Sen. Mike Lee, R-Utah, wrote to Senate Republican leaders just before the vote.

“Our votes in favor of the ‘Obamacare repeal resolution’ do not indicate in any way our support for the revenue, spending, and deficit numbers therein, nor for the use of those numbers as the basis for future federal budgets,” the letter read.

They note that the $29 trillion debt total is simply a number assuming all current spending levels continue – and does not include the full impact of repealing the health care law. That would come later, but this resolution allows several pieces of repeal to require only 51 Senate votes to move forward, instead of the 60 usually needed to limit debate. Republicans control 52 of the Senate’s 100 seats.

In the past, Cruz has had a different take on debt strategy. In October 2015, when the Senate was mired in one of its frequent fights over whether to raise the debt limit, Cruz was highly critical of Republican leaders.

“Unfortunately Republican leadership approaches every battle preemptively surrendering, saying we can do nothing,” he told Christian Broadcasting Network’s David Brody.

But voting for repeal and its huge presumed debt was different, Cruz told McClatchy this week. “We do not accept the underlying assumptions,” he argued, that lead to such a big debt.

To nonpartisan budget-watchers, such logic is ridiculous.

It was, they said, fresh evidence of why the debt keeps growing. The public hardly understands the complex budget process, they said, and see lawmakers making promises and then putting off the harder stuff.

“Nobody’s going to understand any of this,” said Maya MacGuineas, president of the Committee for a Responsible Federal Budget, a Washington watchdog group, of the conservatives’ reasoning.

What the public understands, she said, is that in their daily lives, they look at their budget first and then decide what to buy.

“No company, no consumer should make large decisions without putting a budget in place first,” she said.

What the public understands is that “$20 trillion is not an appropriate level of debt,” said Steve Ellis, president of Taxpayers for Common Sense, a Washington budget research group.

Sen. Rand Paul, R-Ky., was the lone Republican to oppose considering the repeal bill when the Senate voted 51-48 to proceed Wednesday. “Because we’re in a hurry, we can’t be bothered,” he said sarcastically. “It’s just numbers, I was told again and again … and yet the legislation says it is a budget.”

He asked, “Why don’t we put a vision into the budget that represents what Republicans say they are for?”

Paul hopes the House of Representatives will be more receptive to his plea. He met Thursday with members of the House Freedom Caucus, a group of about 40 conservative lawmakers.

Many seemed sympathetic to his concern, and plan to meet Monday night for further talks. One idea, said chairman Rep. Mark Meadows, R-N.C., could be to vote on repeal and replacement at the same time.

Republicans say crafting and passing a leaner budget will be easier with a Republican president in the White House.

“I think the speaker is a pretty good salesman and the president-elect is going to be a good salesman too,” said Rep. Pat Tiberi, R-Ohio, chairman of Congress’ Joint Economic Committee and the House Ways and Means health subcommittee.

Republicans now control the White House and Congress for the first time in 10 years. The GOP last ran the House, Senate and White House from November 2002 through January 2007. The debt grew between 7 percent and 9 percent each year.

After six years of pushing for a repeal of Obamacare, some on the right are now critiquing Congress’ effort for...