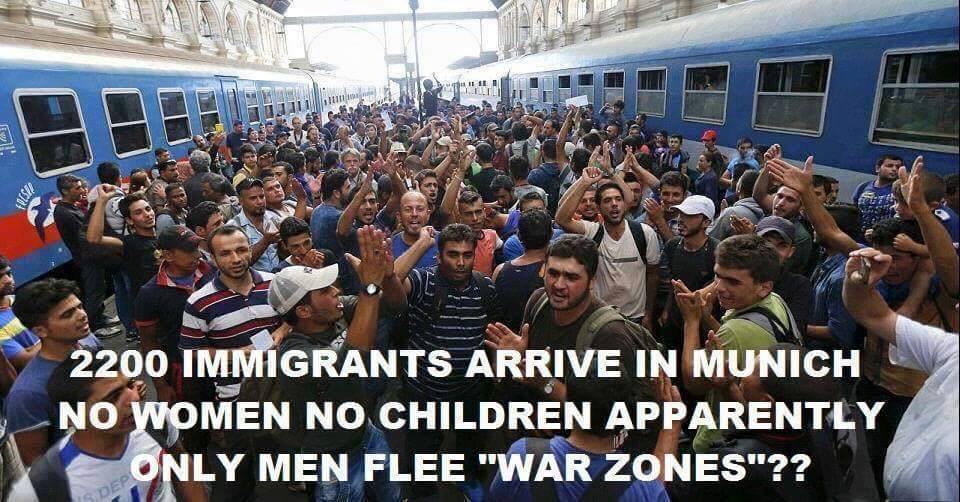 Current headlines tell us the following, just a fraction of what is happening: a third of migrants to Italy are refusing identification measures; in Europe, 75% of refugees are young, fit males, up to 82.8% in France; 1,000 man migrant camp set for peaceful 100 inhabitant English village; Sweden close to collapse; Germany’s Muslim population is to quadruple in the next five years: 20 million Muslims by 2020; 1,100 North African migrants storm Spanish border fence; Calais port closed after protesting migrants storm onto UK-bound ferry.

When Charles Martel of the Franks saw the equivalent happening in France in 732, he saw it as war. Charles ‘The Hammer,’ as he became known, decided to do something about it, and the Battle of Tours, or as some call it, the Battle of Poitiers, which is considered to be one of the most significant battles in world history, resulted.

France was a bit of a mess at this point in time, in fact, it wasn’t really what we know now as France at all. It didn’t really have a central place, or focus, or leader, though it did have a central religion, that being an over-arching Catholicism. It actually wasn’t that long after the end of the civilizing force of the Romans had ended, and Charles Martel was actually the first who made the attempt to restore a centralized government for those who came under the aegis of the Franks, i.e., Gaul, i.e., the French. A brilliant warrior, he did this initially by binding together Bourgogne, Aquitaine, Gascogne, Provence, Lombardie, among other French provinces; then by subjugating Bavaria, Alemannia, and Frisia, and vanquished the pagan Saxons. He was considered to be “the founding figure of the European Middle Ages,” as he was often credited “with a seminal role in the development of feudalism and knighthood.” Martel was also the first Frank to “make the attempt at reconciliation between the Papacy and the Franks.” The Pope’s response was so positive that he wanted the Hammer to accept the title of “The Defender of the Holy See,” an offer Martel felt he had to refuse.

While all this was going on in Martel’s newly forming country, the Islamic Caliphate was attempting to form its own national entity, i.e., a caliphate, starting in 622 under Mohammad, then again in 632 under the Patriarchal Caliphate, and then again starting in 661 under the Umayyad Caliphate, which was fought until 750. It was in 721, that the Emir of Cordoba, who had built up a strong army from Morocco, Yemen and Syria decided to try to conquer Aquitaine, in southwest Gaul, and attempted to besiege the city of Toulouse, then Aquitaine’s most important city. Its leader at the time, named Odo, also known as the Duke of Aquitaine, fled the city to enlist aid, and returned three months later with reinforcements just as the city was about to surrender. Odo and his forces defeated the Muslim invaders on June 9, 721,in what is now known as the Battle of Toulouse.

It is thought that when Odo left, the Muslim invaders became overconfident, and failed to maintain their outer defenses and continuous scouting, and let themselves be surprised by Odo’s return. The Muslim leaders did not intend to let that happen again, and when the succeeding Emir of Cordoba again attacked Toulouse in 730, the same mistakes were not again made and the “results were horrific for the Toulousians.”

What the Muslims had at this point was a large and great army of brutal and skilled veterans who were able to fight brilliantly against the Franks, who were at that time basically an army of not so skilled farmers who could fight only in non-harvest times. That is the limit of what Charles Martel had to hold back the scourge of the Western World at that time.

Martel knew he had no choice but to train an army, and to do that he needed money, and he needed men. So he took from the only source of money at the time, the church, and he took the only men he could, the farmers. The Hammer would have been excommunicated for such non-ecclesiastical actions, were it not for a Muslim invasion soon thereafter.

The hero of the Battle of Toulouse, the great Odo, tried to stave off another Muslim invasion at the battle prior to the Muslim sacking of Bordeaux, in 732, but this time he was not successful, as Christian chroniclers at the time stated “God alone knows the number slain.” Odo fled to Charles, seeking help. Charles agreed, providing that Odo would acknowledge “Charles and his house as his overlords,” which Odo agreed to do.

Charles and his troops, according to all reports of the battle of Tours, also known as the Battle of Poitiers, as the site of the battle was in between the two towns, fought the Muslim hordes, by whom he was vastly outnumbered, like a demon. In fact, it was as a result of this battle that he was given his last name, “Martel,” which means ‘hammer,’ because “he hammered his enemies.” It was said that the Muslims, under Abderame, were shocked at the fighting prowess of Charles Martel and his neophyte forces.

Historians from Sir Edward Creasy, to Gibbon, to John B. Bury, believe that had Charles Martel failed at Tours, “Islam would probably have overrun Gaul, and perhaps the remainder of Western Europe.” Gibbon, in particular, “made clear his belief that the Umayyad armies would have conquered from Japan to the Rhine and even England, having the English Channel for protection, with ease, had Martel not prevailed.”

It was said of the Hammer: “The great victory won by Charles Martel…gave a decisive check to the career of Arab conquest in Western Europe, rescued Christendom from Islam, (and) preserved the relics of ancient and the germs of modern civilization.”

As another great historian, Matthew Bennett, later said of this great 8th Century warrior, “ few battles are remembered 1,000 years after they are fought…but the Battle of Poitiers is an exception…Charles Martel turn back a Muslim raid that, had it been allowed to continue might have conquered Gaul.”

In Case You Missed It:  Get Ready for the Economic Collapse
Posted in Terrorism and tagged Europe, Immigration, Jihadists, Muslims.

Trump warns CNN is in ‘total meltdown with fake news’

Incoming US President Donald Trump has warned that the CNN news network “is in a total meltdown with their fake...