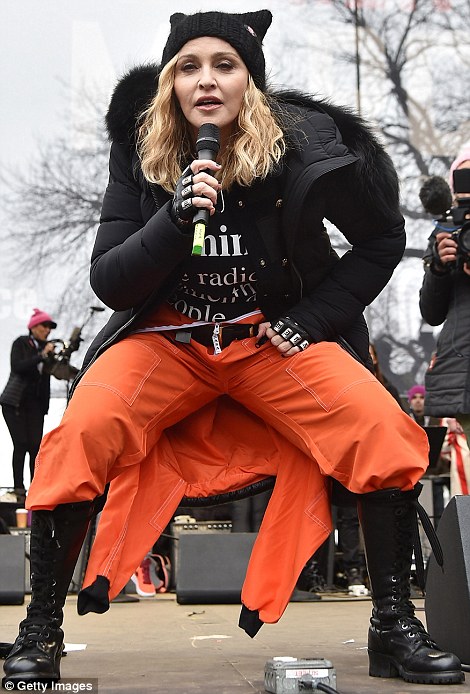 The Secret Service has said they will open an investigation into pop singer Madonna after her intense speech at the Women’s March on Washington on Saturday afternoon.

Donning a black p***yhat, the music icon caused controversy by dropping the F-bomb four times, sparking a slew of apologies from broadcasters airing the protest live.

She went on to speak of her rage at the election result, telling the crowd she had thought a lot about ‘blowing up the White House’ but knew that it ‘wouldn’t change anything’.

According to the Gateway Pundit, a spokesman for the Secret Service said they were ‘aware’ of Madonna’s comments and will open an investigation, but the ultimate decision whether or not to prosecute is the decision of the U.S. Attorney’s Office.

Approximately 200,000 people participated in a ‘Women’s March’ in D.C. One of the organizers of the march, Linda Sarsour is a Pro-Palestine Muslim activist.

She also advocates for Sharia Law in America and has ties to terrorist organization, Hamas.

Linda Sarsour is very vocal about her support for Palestine and her utter hatred for Israel. She has ties to the terrorist organization, Hamas.

The fact that an Islamic faction was one of the organizers of the Women’s March is laughable at best. Islam is responsible for the worst abuses of women and children not only throughout history, but at present day. Islamic supremacists who wish to impose Sharia law in America have infiltrated various leftist movements in order to appear as an oppressed minority.

These foolish women are being led by a Muslim who believe’s in Sharia Law. Under Sharia law they would lose all those rights as being women, their word is only worth 1/2 a man according to Islamic law, IDIOTS!