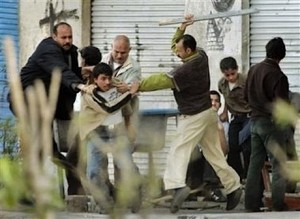 In the past year, the persecution of Christians has not only increased, but it has also spread to more corners of the globe – with incidents occurring on every continent, according to a new report.

The advocacy group Open Doors USA recently released the latest edition of its annual World Watch List, which ranks countries based on the treatment of their Christian populations. The group said the increase in incidents considered persecution was alarming and only getting worse.

It is appalling that Open Doors has to report that persecution has increased again in 2016 and we are still at the worst levels of persecution in modern times,” David Curry, president and CEO of Open Doors USA, said to Fox News. “The spread of persecution has gotten worse, now hitting nearly every continent in the world. There were 23 Christians killed in Mexico specifically because of their faith.”
The report comes on the heels of another study by the Center for Studies on New Religions that showed nearly 90,000 Christians were killed for their faith in 2016 and that as many as 600 million were prevented from practicing their faith through intimidation, forced conversions, bodily harm or even death.

“These numbers underscore what we already know,” Robert Nicholson of the Philos Project, an advocacy group for Christianity in the Middle East, told Fox News at the time of the report’s release. “There are many places on Earth where being a Christian is the most dangerous thing you can be. Those who think of Christianity as a religion of the powerful need to see that in many places it’s a religion of the powerless. And the powerless deserve to be protected.”

Open Doors said in its new report that some 215 million Christians around the globe are facing some degree of persecution. But that number, it noted, could actually be much higher.

Curry said the group has seen an uptick in persecution in various countries throughout Asia, driven by governments and Islamic extremism. Christians in that part of the world have been targeted by nationalist religious movements — Muslim, Hindu and Buddhist — in such countries as Pakistan, India and Myanmar.

“Governmental raids increased, church membership requirements were suddenly doubled overnight resulting in churches being regarded as now illegal, among other things,” Curry told Fox News. “This is one area of the world that we are keeping a careful eye on because of the dramatic rise in persecution.”

Many of these groups increasingly view Christianity as a foreign, “colonial” import, and believe its practitioners are doing the bidding of the West, experts say.

India saw some of the highest increase in incidents as Hindu nationalists battered Christian churches ever since the election of Prime Minister Narendra Modi in May 2014. Since he has been in office, Modi has instilled Hindu nationalism, and experts say that has had devastating consequences for Christians in India.

There was an average of 40 incidents per month of Christian persecution last year in the subcontinent, including pastors beaten, churches burned and Christians harassed. Eight Christians were killed for their faith.  Of the 64 million Christians in India, approximately 39 million experience direct persecution, according to the Open Doors study.

While Christians continue to be targeted by ISIS radicals in Syria and Iraq, the religion is also under threat in other sections of the Middle East – with incidents of Christian persecution on the rise in Iran, Pakistan, Saudi Arabia and other Gulf nations.

Surprisingly, North, Central and South America are also seeing increases of Christian persecution – even though Christianity is by far the most practiced religion in the region. In all, 23 Christian leaders in Mexico and another four in Colombia were killed specifically for their faith. 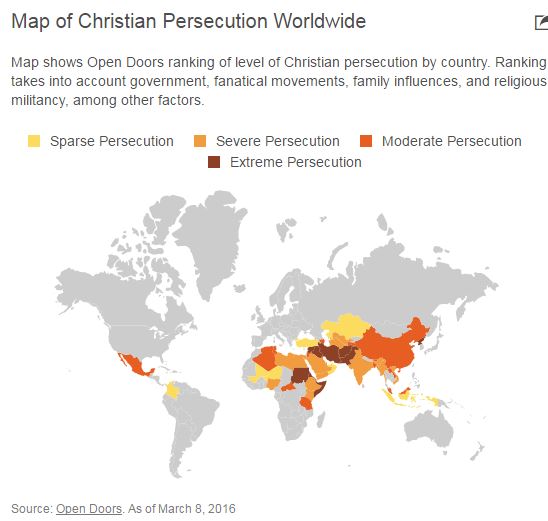 While Mexico is considered more than 80 percent Catholic, a number of priests have come under attack and killed in the country the past few years.

In January of last year, some 30 evangelical Christians in the state of Chiapas were banished by village elders who then destroyed their homes, according to supporters.

Curry said he hopes the Open Doors list will bring more attention to the global epidemic.

“It is vital to remember that the Open Doors World Watch List is not just about numbers. Rather, this represents a real life that was either taken or harmed. It is someone’s mother, father, brother, sister, friend, etc.,” he said. “This is one of those issues that really are about life and death. It matters what we do as Americans and it is time that we took a stand and said that we will not allow this to happen anymore.”

In Case You Missed It:  MUST-LISTEN: Dr. Robert Malone and Mike Adams talk the rise and fall of civilizations and how we REBUILD a society rooted in MORALITY and FREEDOM
Posted in Freedoms and tagged Christian Genocide, Christianity.

Yes, POTUS can limit the admission of foreigners

By Guest Column —BombThrowers It isn’t easy to avoid listening to the wild and crazed claims in the liberal media...