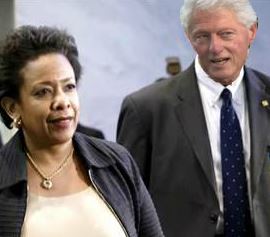 Today, however, Schumer called for Attorney General Jeff Sessions to resign and demanded a special prosecutor because of a report Sessions had met with the Russian Ambassador in 2016. Sessions denies the report and says he “never met with any Russian officials to discuss the issues of the (Trump presidential) campaign.”

Just last year, Schumer dismissed Attorney General Lynch’s private meeting with the husband of Hillary Clinton, who was under investigation by the FBI, a part of the Justice Department.

“I think it didn’t matter,” Schumer said regarding the then-attorney general’s private meeting with Clinton – even though the former president’s wife, Hillary, was running for president and had been endorsed by Lynch’s boss, President Barack Obama.

The FBI was investigating Mrs. Clinton’s use of a private email server as secretary of state, amid concerns that she mishandled classified information, and it was up to Lynch to sign off on that investigation.

At that time, Schumer said Americans should simply take the attorney general’s word about what was discussed during the meeting:

“She’s an honorable person, we know that,” Sen. Chuck Schumer (D-N.Y.) said. “She has said nothing was discussed related to the investigation. So you have two choices — to say this didn’t matter or she’s lying. I think it didn’t matter. I don’t think she’s lying.”

Lynch had contended that she and Bill Clinton merely discussed grandchildren, golf and social matters.

It might seem outrageous and unprecedented that a newly departed president would devote himself to overthrowing his successor, but that...