Originally published under the title “What I Saw in Sweden Last Week Is Not ‘Normal’ and Trump Is Right.” 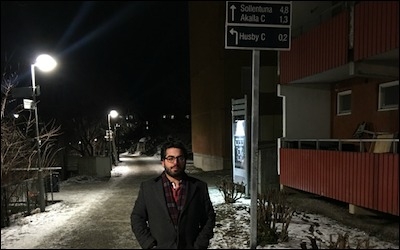 The author in Sweden earlier this month.

When I got off the train at Malmo’s Central station last week and dragged my suitcase noisily over the cobbled pavements I thought to myself, “There’s no way this place has ‘No Go Zones’.”

Downtown Malmo is a gorgeous though freezing cold place to visit in February. I checked into my hotel — passing between a “Burger King” and a “Schwarma King” along the way, the latter of which recently took the spot of the “Stortogets Gatukok” in Malmo’s Great Square — and set off for my destination: Rosengard.

Much has been written about Sweden’s “No Go Zones” in recent years. We’ve watched them burn over the years with a combination of disbelief and shock. When the Sweden Democrats leader Jimmie Akesson told me — as we walked through Molenbeek in Brussels just days after the Paris terror attacks in 2015 — “we have these places in Sweden too,” I was skeptical.

Sweden is supposed to be paradise-like, I thought. Isn’t it all leggy blondes and Ikea and Abba and lingonberries? Well if you stay downtown in Malmo or Stockholm, perhaps it is. Even the elevator muzak had a whiff of “Fernando” about it.

But the stereotypes and clichés, kept alive for the tourists no doubt, end when you leave the city centres and head out to some of the suburbs.

My first stop was Rosengard, where my colleague Oliver Lane first reported from in September 2015.

In Case You Missed It:  Obama Holdovers with Terrorist Connections Still Employed by the DoJ

As we drove around the housing estates at night, it became clear the problems in these areas: drugs, rape, police assaults and more, were created in large part by state-sponsored “multiculturalism.”

Sweden’s liberal migration policies, that is to say a failure to maintain any sort of border control at all over the past few decades, have led to ghettoised communities that the state props up with generous welfare payments and socialist lecturing.

Sign posts on noticeboards advertised for left wing political parties, and as we passed by a mural of a mosque and parked up at the Herregarden housing estate, a couple of girls we asked for directions signed off, “Good luck there!”

It being below freezing with a bitter wind, there were few people out of the streets. A few hijab-clad women scurried between buildings, sometimes with children in tow. Not one would speak to us, or look at us, at all.

“Maybe they don’t know what I’m saying in Swedish,” my guide remarked.

And it would make sense that they didn’t. Some estimates put the population of Herregarden’s housing estates at 96 per cent foreign born or of foreign background.

A few men shuffled out of a basement, again unwilling or unable to speak. I later came to find out from a former police officer in the city that they were likely attending what is referred to as a “cellar mosque” — an underground, basement place of prayer and preaching often unknown to authorities.

More on Rosengard in my upcoming book — which I can’t talk about at length right now — but safe to say I believe none of this is “normal” and if it is the “new normal” it should be roundly rejected as President Trump intimated earlier this week, much to the chagrin of Sweden’s censorious, liberal-left government.

This is the same in Stockholm’s suburbs of Rinkeby and Husby, where filmmaker Ami Horowitz was recently beaten up for attempting to film.

Within minutes of exiting a cab outside central Husby, I was surrounded by drug dealers pushing “hashish” and “marijuana.” Within a few seconds more we witness two van loads of Swedish police appearing to negotiate one man’s arrest from a building guarded by burly men.

“Why are there so many satellite dishes?” I asked one of my guides.

“They don’t watch Swedish television. They don’t speak Swedish. They want to receive television from their home countries in their native languages.”

This, apparently, is the well-integrated paradise that CNN wants you to believe in.

A poster on a notice board encourages women who are being beaten or abused by their partners to call a number and speak out. A man laughs to himself hysterically as I take pictures of his “street market stall” which consisted of a few clothes draped over a wall, and a clearly broken, old computer. Men — and only men — gather inside the central square’s cafes, keeping a beady eye on us as they sip their mint tea in the middle of the work day.

Just a few days before my visit, police officers in the area were punched, kicked, and attacked with glass bottles while on a routine patrol.

Perhaps these areas aren’t truly “No Go Zones” for someone like me, broadly minding my own business and chatting with local shop owners.

But for young women, for police and other emergency services, you take your life into your hands when you enter these areas. And it’s not just in Sweden either.

You’ll be able to read more about my travels in my book. But from Molenbeek to Beziers to Malmo to Paris to Dewsbury — Europe is being fundamentally altered by uncontrolled migration. And that’s why President Trump is right to communicate his disbelief about what is happening in Sweden.

Raheem Kassam is a Shillman-Ginsburg fellow at the Middle East Forum and editor-in-chief of Breitbart London.

BOMBSHELL: Now We Know WHO Signed Off on Wiretapping Trump. TREASON.

Sources reveal Attorney General Loretta Lynch  signed off on the warrant allowing the Obama Administration to wiretap Donald Trump, via...