Rachel Maddow has Donald Trump’s tax returns and was boasting she would illegally will reveal them on her show, the MSNBC host said Tuesday. 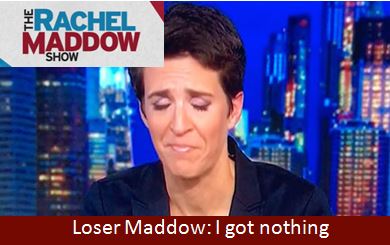 At 5:24 PM, Pacific, Maddow clarified that she has in her possession Trump’s 2005 1040 long form and was going to release them.

Two pages were illegally obtained from what it said were Trump’s 2005 Form 1040. David Cay Johnston, a former reporter for The New York Times, disclosed the details of the two pages, which he said were sent to him through the U.S. Postal Service, on Maddow’s program.

Rachel Maddow was widely mocked on social media Tuesday night after drawing out the revelations in what she announced as an “exclusive story” regarding Donald Trump’s tax returns, that reported nothing exciting and she was rambling for 20-minutes outlining her often tangential theories regarding Trump’s connections to Russia.

In fact, Maddow took so long to get to the point, that the Trump White House scooped her..

Yep, they beat Maddow to the punch and the Whitehouse released Trumps 2005 tax return prior to Maddow’s show airing them, the White House said Tuesday that President Donald Trump made more than $150 million in income in 2005 and paid $38 million in income taxes that year.

The acknowledgement came shortly before MSNBC host Rachel Maddow had a chance to commit her illegal act. Worse yet for leftist Maddow is the taxes reported nothing exciting at all, we’ll have to watch and see how the liberal media will spin and mislead its TV viewers as to the tax return.

The White House pushed back Tuesday night, saying that publishing those returns would have been illegal.

“You know you are desperate for ratings when you are willing to violate the law to push a story about two pages of tax returns from over a decade ago,” the White House said in a statement.

The unauthorized release or publishing of federal tax returns is a criminal offense, punishable by a fine of up to $5,000 and up to five years in jail. But Maddow argued that MSNBC was exercising its First Amendment right to publish information in the public interest.

For federal tax returns, there is a specific statute that prohibits publishing without consent: 26 U.S.C. § 7213(a)(3).

(a)General ruleReturns and return information shall be confidential, and except as authorized by this title—

no officer or employee of the United States,

no other person (or officer or employee thereof) who has or had access to returns or return information under subsection (e)(1)(D)(iii), subsection (k)(10), paragraph (6), (10), (12), (16), (19), (20), or (21) of subsection (l), paragraph (2) or (4)(B) of subsection (m), or subsection (n),
shall disclose any return or return information obtained by him in any manner in connection with his service as such an officer or an employee or otherwise or under the provisions of this section. For purposes of this subsection, the term “officer or employee” includes a former officer or employee.
https://www.law.cornell.edu/uscode/text/26/6103
The 1040 form shows Trump made more than $150 million and paid $5.3 million in regular federal income tax, and $31 million more in the alternative minimum tax.  The returns show ” large-scale depreciation.” The pages show a writedown of $103 million from real estate depreciation,

The concept of depreciation (also known as cost recovery) operates on the assumption that physical assets lose an equal amount of value each year due to wear and tear.

Keep in mind that cost recovery or depreciation does not eliminate income taxes. In technical terms, an annual depreciation deduction is figured on a reduction in basis of the property. This is calculated as the investor’s original cost in the property plus capital improvements. This is then recaptured (added to the investor’s taxable profit) in full and taxed upon disposition or sale.

Our Federal tax system is set up to support investment in income producing properties.  One of the biggest benefits is the “phantom” income that is known as depreciation.  Depreciation is an expense deduction which doesn’t require an outlay of cash other then the amount invested for the purchase and/or renovation of the property.

Please remember this when you hear the liberal media spin his tax return, they are already reporting he only paid 4% toward Federal taxes, ignoring the 31 million in alternative tax and ignoring the fact that any depreciation will be recaptured as a tax once the properties are sold.

Conclusion: The liberals have nothing exciting, all they have is a very wealthy man following the tax laws of our nation, and guess what .. no links to Russia either.

It's 9:08. And we are talking about yachts being parked next to one another.

So what we've learned so far from @MSNBC is that @realDonaldTrump paid a hefty sum in taxes in 2005. This seems like a good story for Trump.

Without any self-awareness, Rachel Maddow holds up two pages and shrugs "this is all we've got."

Trump paid nearly twice as much tax in 2005 than that Socialist Bernie did in 2015!

When is Maddow going to prison for violating federal privacy laws?

Lastly… when is the IRS going to be shut down for leaking confidential materials, and doing so with a political agenda to undermine a sitting president and government? Sedition I think it is called.

Liberals are serial lunatics, perpetually angry zealots, profoundly criminal and inveterate liars to boot. They pose a clear and present danger to our land, laws, livelihoods and lives and must be dealt with accordingly.

Trump pays $38 million while 9 MSNBC anchors have tax liens filed against them. Such infuriating hypocrisy. The Democrats: angry, self-hating, JEALOUS misfits. If I were Trump, I would order the IRS to pursue criminal charges on these tax frauds. Pick high-profile targets like Sen. Claire McCaskill, all news anchors, ESPN haters, athletes, musicians, and actors.

This nothing tax return was so embarrassing for Maddow that there is now speculation  that Trump leaked his own taxes to troll the libtards like Maddow,  who really knows who send them the envelope?

Chris Coons (D-DE) has retreated from his claim that there’s solid evidence of collusion between the Trump campaign and Russian...