The recent conflicts between Turkish government ministers and various European countries have been generated deliberately by President Recep Tayyip Erdogan. Mr. Erdogan desperately needs the votes of Turkish citizens abroad if he wants to have any hope of winning next month’s referendum on the expansion of his presidential powers. By demanding that his ministers be allowed to campaign on his behalf for a “yes” vote, Mr. Erdogan has caused outrage in Europe, and not just in the EU — Switzerland has been a target, in addition to Austria, the Netherlands, and Germany.

The tit-for-tat aggression resumed its escalation between Turkey and the Netherlands, with Turkish Deputy Prime Minister Numan Kurtulmus exclaiming from Ankara that “Europe’s politicians are under fascist, neo-nazi influence” and in response, Turkey will suspend all high-level diplomatic meetings and cancel all flight permissions for Dutch politicians.

Maybe we should call spade a spade. Turkey is showing signs of undeniable “Hitlerism”.

Turkey says it is halting all high-level political discussions with the Netherlands in the wake of the Dutch government’s decision to bar two cabinet ministers from campaigning in the country. Deputy Prime Minister Numan Kurtulmus said during a news conference following a weekly cabinet meeting that Ankara also is closing its air space to Dutch diplomats until the Netherlands meets Turkish requests.

The most troubling development, and one which has the potential to sway the outcome of the Dutch election which will be held in less than two days, is that in the final power play aimed towards Merkel, Kurtulmus exclaimed that since “Europe has not kept its promises on the migrant deal, for us that agreement has ended.”

Which means that one year after Turkey collected $3 billion for the migrant deal, Turkey has just voided the agreement, and the next step would be that Turkey is about to flood Europe with Muslim refugees currently held inside Turkish borders. By some estimates Turkey currently harbors over 2 million Muslim migrants, Europe’s refugee situation is about to get far worse, and as a corollary, support for anti-immigrant political organizations across the continent is about to take another step function higher.

Hungary has already started Construction on a second border fence as the government increases measures to stop high risk Muslim migrants entering Europe through Hungary. The Summer months usually signal a resurgence in the number of Muslim making the  journey into Europe along the Balkan corridor.

Also a large number of migrants are flooding Europe via Libya after NATO destabilized that region too after a an Obama led U.S. drone strike was called in with hellfire missiles on Qaddafi caravan,  and then French warplanes launched a second strike on the convoy as it sped west along the coastal highway sending Qaddafi running into hiding and be captured by radical Islamic rebels. The Obama administration supported the NATO intervention in 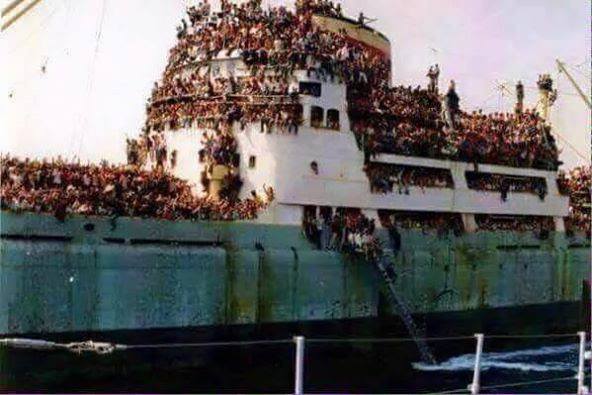 2011 that led to Gaddafi’s ouster (and eventual execution), but NATO had no plan for what a post-dictatorship Libya should look like. With no leadership, the country descended into a civil war that continues today, Islamic terrorist are taking the region over.

Russia is trying to stabilize Libya by putting in a hand selected Gen. Khalifa Haftar to take out terrorist whom have all but taken over Libya. Russia is trying to clean up the mess NATO created and bring stability back to the region. Russia has discussed the arming and training of Haftar’s Libyan National Army. Russia reportedly agreed to press the United Nations to drop an arms embargo put in place in 2011, while Haftar gave the Russians a list of equipment his army needs.

Stabilizing Libya and bringing new leadership to the region will help stop the tide of Migrants ships leaving that area bound for Europe. Italy has been hard hit by migrants boats flooding Europe with high risk mostly Muslim men flooding its shores.

Apparently, Europeans are the last to know that it IS an invasion. Mostly younger Muslim Migrant men set to destabilize Europe. Even the Islamist Erdogan is admitting that refugees are weapons to be used against the West. Erdogan openly admits that he’s retaliating against EU political policies he doesn’t like by siccing more Muslim  refugees on them.

Imagine thousands upon thousands of Muslim’s marching from one country to another. The result would be quite chaotic for the European region being invaded.

Therefore, a certain type of border control in every nation is desirable, until such time as every country is economically self-sustainable and at peace.

No one really wants to leave their home country, unless they are forced to do so either for political (war included) or economical reasons. Therefore, in order for every country’s borders to be at peace, mostly some things are needed.

First, all current superpowers, such as the US Government and NATO, need to stop meddling in other people’s countries and stop the regime change insanity, causing high risk Muslim jihadist to flood Western nations.

In Case You Missed It:  Study: Over Half of Migrants and Refugees Are on American Taxpayer-Funded Welfare
Posted in Terrorism and tagged Immigration, Migrants, Muslim, Turkey.

Rep. Steve King said Monday that he wasn’t making a statement about race but rather about immigration and culture when...