The 39-year-old Islamic Terrorist was killed at Paris’ Orly airport on Saturday after trying to wrestle away a soldier’s weapon had already crossed authorities’ radar for Islamic extremism.

Paris police said the terrorist house was among scores searched in November 2015 in the immediate aftermath of ISIS-led Islamic suicide bomb-and-gun attacks that killed 130 people in Paris. Those searches targeted Muslims with suspected radical leanings of Islam.

The alleged attacker said that he was there “to die for Allah” (the Islamic God) and dropped a bag on the floor containing a can of gasoline, according to prosecutors.

The police office said its anti-terrorism division was handling the investigation and had taken the attacker’s father and brother into custody for questioning.

A French official connected to the investigation confirmed French media reports identifying the attacker as Ziyed Ben Belgacem a devout Muslim whom interpreted the Islamic teachings as a call to commit acts of Terror on innocent people.

French Defense Minister Jean-Yves Le Drian said the attacker assaulted three Air Force soldiers patrolling the airport. He said the soldier who was attacked managed to hold on to her rifle and the two soldiers she was with opened fire to protect her and the public. Soldiers fired eight rounds in all at the Muslim terrorist whom attacked her.

No one else in the busy terminal was hurt, but thousands of travelers were evacuated and flights were diverted to the city’s other airport.

A spokesman for the military force that patrols public sites in France told BFM television the soldier attacked was “shocked” but uninjured after the “very violent aggression” by a Terrorist who was quickly shot dead by two of her fellow patrolmen.

French President Francois Hollande ruled out any link between Saturday’s attack and the upcoming French presidential election in April and May, noting that France has been battling the threat of Islamic extremism for several years of immigration from the Islamic world.

He said the attack shows that France’s policy of having military patrols guarding public sites “is essential,” and that the nation “must remain extremely vigilant.”

Interior Minister Bruno Le Roux said the man was linked to a carjacking about 90 minutes earlier in a northern Paris suburb.

In that incident, the Paris police office said, a man fired birdshot at officers who stopped him during a traffic stop, wounding one in the face. He then fled and stole a woman’s car after threatening her with a weapon. The car was found near Orly. 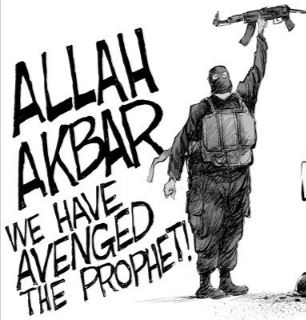 A police source described the man as a radicalized Muslim but did not identify him by name, according to Reuters.

Witnesses described a chaotic scene at the airport.

A witness identified only as Dominque told BFM television: “The soldiers took aim at the terrorist, who in turn pointed the gun he had seized at the two soldiers.”

A French journalist on a flight that landed from Nice told France-Info radio passengers were kept on the plane and weren’t allowed to disembark.

A national police official said the soldiers are part of the Sentinel special force installed around France to protect sensitive sites after a string of deadly Islamic extremist attacks.

Police warned visitors to avoid the airport while the police operation was underway. Emergency vehicles surrounded the airport as confused passengers gathered in parking lots, and the elite RAID special police force worked to secure the airport.

An airport authority official said flights to and from Orly were being redirected to Charles de Gaulle airport.

The shooting came after a similar incident last month at the Louvre Museum in which an Egyptian man attacked soldiers guarding the site and was shot and wounded.

The incident also comes just days after a letter bomb exploded at the International Monetary Fund offices in Paris. One person was injured.

The attack further rattled France, which remains under a state of emergency after Islamic attacks over the past two years that have killed 235 people.

Donald Trump has set two executive orders to try and limit immigration of terrorist from very high risk countries where terrorism is a serious problem,  so far liberal judges have overturned these orders and allowed American citizens to be a greater risk of event like we are seeing in France.

Conservatives are coming to the defense of The Daily Signal after The Washington Post questioned its journalistic legitimacy for being...