President Donald Trump’s Supreme Court nominee has an extensive record ruling on and free press and First Amendment issues. He has sided with the media in libel cases, against government searches of reporter notes and computers, and generally placed a high bar for suing news organization over privacy rights. 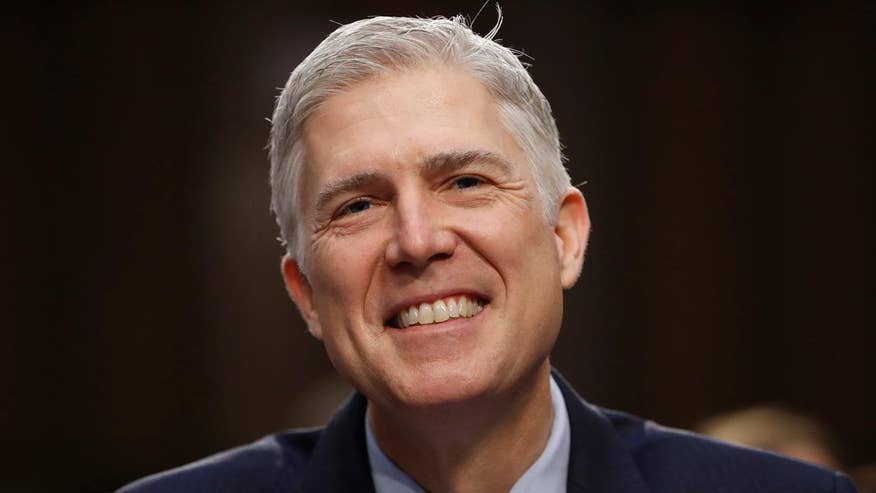 The Reporters Committee for Freedom of the Press, a 45-year-old legal group made up of attorneys providing free legal resources and advocacy to journalists, did an analysis of Judge Neil Gorsuch’s record on the U.S. Court of Appeals for the 10th Circuit on a number of issues.

Even in cases that did not directly impact news media, the organization scored Gorsuch favorably for freedom of speech and more transparent government in his rulings.

Though Gorsuch allowed a court file to remain sealed because it contained trade secrets, he expressed skepticism of keeping them secret, according to the report.

“It seems to be the case that while President Trump has talked endlessly about not respecting the media, he didn’t pick a candidate for the Supreme Court who will pursue that agenda,” Gregg Leslie, legal defense director for the Reporters Committee told The Daily Signal.

The report says: “Gorsuch does not have an extensive history of deciding cases involving free speech, free press, and freedom of information issues, but the opinions he authored or joined during his more than 10 years on the Tenth Circuit that do touch upon those issues reflect the application of well-established First Amendment principles in a consistent way.”

Here are the cases Gorsuch has ruled on regarding the free press and free speech cited in the Reporters Committee for Freedom of the Press analysis.

Gorsuch wrote a decision in 2011 that sided with the AE Television Networks after it inaccurately identified a Colorado prisoner as a member of the Aryan Brotherhood, a white supremacist prison gang, in a documentary.

Gorsuch wrote that though the plaintiff wasn’t “formally a member of the Brotherhood, he surely did affiliate with the organization,” because there was evidence he conspired with the gang to transport drugs.

The distinction between being a member and being affiliated with the Brotherhood could “cause some modicum of additional injury to [the plaintiff’s] reputation,” Gorsuch wrote. But added, “not one a juror could find likely to be significant to a reasonable person.” Further, the opinion states the inmate was unable to prove harm to his reputation.

Gorsuch joined in a 2007 opinion written by Judge David M. Ebel that said a TV station didn’t invade the privacy of undercover police officers after it broadcasted their names and undercover status. The story was about the officers’ alleged involvement in a sexual assault.

The 10th Circuit determined the plaintiffs lacked any invasion of privacy claim under New Mexico law. While KOB-TV reporters knocked on their doors and caught their faces on camera declining to comment, the opinion says the reporters didn’t “badger their way into the officers’ homes” or “repeatedly approach” them. KOB-TV is an NBC affiliate in Albuquerque, New Mexico. Ebel further wrote the reporting was “a matter of public interest in First Amendment analyses” because there is “strong public interest in ensuring open discussion and criticism of [police officer] qualifications and job performance.”

The opinion continued: “Courts have not defined the tort of public disclosure of private facts in a way that would obligate a publisher to parse out concededly public interest information, e.g., sexual assault allegations against two members of the police department, from allegedly private facts, e.g., the officers’ identities and undercover status.”

In 2007, Gorsuch joined the 10th Circuit court in upholding a lower court’s dismissal of privacy claims against a reporter with KOCO-TV, an ABC-affiliated station in Oklahoma City, and the station’s owner, the Hearst Corporation. The court held that a journalist wasn’t a “state actor,” thus could not be sued for a civil rights violation.

The case emerged after KOCO-TV broadcasted an image from a video of an alleged sexual assault that a police officer provided to the station. In this case, the victim accused her husband of rape.

The 10th Circuit held the plaintiff didn’t provide any explanation of why the limited broadcast of the video was an intrusion. It further concluded the broadcast was not a publication of private facts since it was a pending prosecution.

“A matter can be of legitimate public concern even though it concerns private individuals … who have not sought publicity or consented to it, but through their own conduct or otherwise have become a legitimate subject of public interest,” the 10th Circuit held. The ruling continued, “Every private fact disclosed in an otherwise truthful newsworthy publication must have some substantial relevance to a matter of legitimate public interest.”

Gorsuch joined the 2011 panel opinion for a case touching on First and Fourth Amendment issues, after a college professor made a criminal libel complaint against a parody publication. Thomas Mink ran The Howling Pig, which published a picture of a professor modified to look like a makeup wearing member of the rock band, Kiss.

After the professor made a criminal complaint, the police searched Mink’s home and took his computer.

In this case, the 10th Circuit determined the Fourth Amendment’s “particularity requirement” made the search warrant for “all computer and noncomputer equipment and written materials in [a defendant’s] house” too broad.

The court further held the criminal defamation prosecution against Mink could not be upheld under the First Amendment.

The ruling said, “Even false statements of fact are protected from a defamation claim if any reasonable person would recognize the statements as parody.”

Gorsuch didn’t rule on any cases for news media access to closed court hearings or documents. He did, however, rule in a 2013 case to allowed the case file in an employer-employee dispute to remain closed because it involved trade secret material. In writing the panel’s opinion, though, Gorsuch noted, “We generally regard court records sealed from public scrutiny with a healthy skepticism.”

Gorsuch’s support for free speech didn’t extend to lying in commercials. Gorsuch wrote the 10th Circuit court’s opinion in a 2015 false advertising case under the Lanham Act, which upheld a lower court ruling that a competitor’s false statement was enough material to support a false advertising claim.

“Most everyone expects a little audacity—maybe even a little mendacity—in their advertising,” Gorsuch’s opinion stated.

“Sometimes it can even prove amusing. Like the local greasy spoon’s boast that it pours the ‘world’s best cup of coffee.’” But added, “underhanded deception with material commercial consequences” is illegal.

Gorsuch joined the majority in a 2009 libel case where the 10th Circuit held that Allstate, an insurance company, was not liable for defamation, after accusing a former contractor of violating rules for signing documents. The court opinion said that the “minor inaccuracies will not preclude the defense so long as the substance, the gist, the sting of the defamatory charge can be justified.”

Gorsuch wrote the opinion in a 2008 trademark case about “ideas/expression dichotomy.” The journalism group characterized this as upholding a well-established standard that holds ideas or facts can’t be copyrighted, but the expression of ideas can be. The 10th Circuit determined that digitally-created replicas of Toyota cars weren’t “sufficiently original” to be copyrighted.

Gorsuch wrote, “just as photographs can be, but are not per se, copyrightable, the same holds true for digital models. There’s little question that digital models can be devised of Toyota cars with copyrightable features, whether by virtue of unique shading, lighting, angle, background scene, or other choices.”

Is The Left Trying To Start A Civil War?

By Michael Snyder An army of subversives is attempting to undermine the Trump administration from within the government, and at...