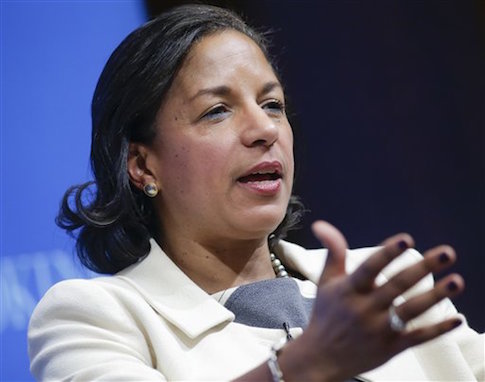 Just 12 Days ago, Susan Rice appeared on PBS News hour and was asked about the “unmasking” scandal that, today, blew up in her face. Her denial is nothing short of astonishing.  If this morning’s Bloomberg report is correct, Susan Rice was the Obama admin official demanding the unmasking of Trump transition team members whose protected identities had been swept up in “incidental” intel collection. …And yet there she was, less than two weeks ago claiming to know nothing about any of it.

From the official transcript of the interview:

WOODRUFF: We spoke earlier this evening with former Obama White House National Security Adviser Susan Rice, the author of that piece. It was her first interview since leaving the White House.

I began by asking about the allegations leveled today by House Intelligence Committee Chairman Devin Nunes that Trump transition officials, including the president, may have been swept up in surveillance of foreigners at the end of the Obama administration.

RICE: I know nothing about this. I was surprised to see reports from Chairman Nunes on that count today.

And let’s back up and recall where we have been. The president of the United States accused his predecessor, President Obama, of wiretapping Trump Tower during the campaign. Nothing of the sort occurred, and we have heard that confirmed by the director of the FBI, who also pointed out that no president, no White House can order the surveillance of another American citizen.

That can only come from the Justice Department, with the approval of a FISA court. So, today, I really don’t know to what Chairman Nunes was referring, but he said that whatever he was referring to was a legal, lawful surveillance, and that it was potentially incidental collection on American citizens.

RICE: And I think it’s important for people to understand what incidental means. That means that the target was either a foreign entity or somebody under criminal investigation, and that the Americans who were talking to those targets may have been picked up.

WOODRUFF: Well, I wanted to ask you about this, because, as you also know, in the last few weeks, The New York Times has reported that, in the final days of the Obama administration, individuals went out of their way to spread information throughout the government about what they knew about intelligence that the Russians had interfered in the election last year, and that there may have been a connection with Trump campaign officials.

So, that story has now been out there for several weeks. Could there be a connection here?

RICE: I’m not aware of any connection.

I read The New York Times story. I must say, Judy, as one of the most senior White House officials and the most senior responsible for national security, I found that report a bit perplexing. I wasn’t aware of any orders given to disseminate that kind of information.

RICE: So, I have no idea whether that was the case.

But the fact is that the president did request back in December that the intelligence community compile all of the information that it had on what had transpired during the campaign with respect to the Russians involving themselves in the presidential campaign.

RICE: I don’t think that was the concern, because, to the extent that there was any need to follow up, it wouldn’t be done necessarily by the White House, but by the intelligence community, and by the Justice Department, if appropriate.

I think our interest was, and the president’s direction was, let us make sure that we have compiled and put together in one place all the information that we have, so that it is there for the new administration, it’s there for the American people, and there for Congress to utilize as they see fit.
“I know nothing about that.”

Fine. I get that I shouldn’t really expect the truth from the disseminator of the YouTube video lie, but …wow. Not only did she know about it, she was asking for the unobscured names of the Trump team members involved.

In Case You Missed It:  Creepy Biden Grabs Child During Bill Signing, Says, “Meet Me After This, I Can Show You Around the White House” (VIDEO)
Posted in Tyranny and tagged Democrats, Surveillance.

LAWRENCEVILLE, N.J.—House Republican leaders made a big mistake by trying to rush through their plan to replace Obamacare, conservative star...