Islamic terrorist in St Petersburg Russia have blow up two train carriages  at metro stations in St. Petersburg on Monday, At least 10 people were killed in the explosions.

Interfax news agency quoted an unnamed source as saying one of the blasts was caused by a bomb filled with shrapnel.

Video showed injured people lying bleeding on a platform, some being treated by emergency services. Others ran away from the platform amid clouds of smoke.

A huge whole was blasted in the side of one carriage with mangled metal wreckage strewn around the platform. Passengers were seen hammering at the windows of one closed carriage.

Authorities closed all St. Petersburg metro stations. The Moscow metro said it was taking unspecified additional security measures in case of an attack there.

Russia has been the target of attacks by Muslim Chechen militants in past years. Islamic Chechen rebel leaders have frequently threatened further attacks. 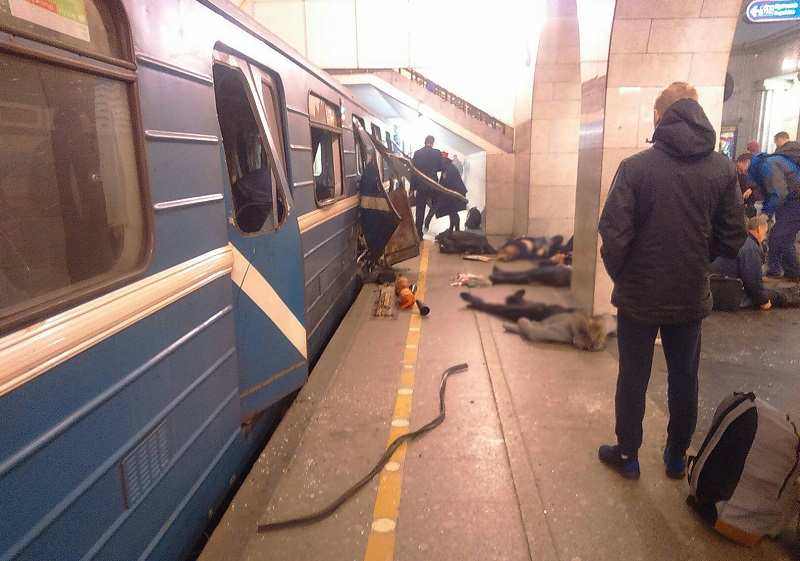 Over 330 people, half of them children, were killed in 2004  at a school in southern Russia after a hostage taking by islamist militants. In 2002, 120 hostages were killed when Muslims seized Moscow theatre in another hostage taking by Islamic terrorist.
Putin, as prime minister, launched a 1999 campaign to crush a Jihadist Islamic government in the muslim southern region of Chechnya, and as president continued a hard line in suppressing Muslim Terror.
At least 38 people were killed in 2010 when two Muslim female suicide bombers detonated bombs on packed Moscow metro trains.

#BREAKING We consider all causes, including #terrorism, #Putin on twin explosions at St.Petersburg's metro.#StPeteblast pic.twitter.com/gOzi4V1Qku

The explosion was caused by an unidentified explosive device, officials announced, adding that all metro stations in St. Petersburg have been closed.

The St. Petersburg governor’s office said there were as many as 50 victims in the incident, including 10 fatalities. Two of the injured have been taken for surgery while two others are being prepared for operation.

The metro is “basically” fully evacuated, according to Russia’s National Anti-Terrorism Committee

We Hear You: I’m a Sailor, a Marine, and a Transgender Woman Who Was Born This Way

Editor’s note: One reader who we heard from awhile back marked March 31 as Transgender Day of Visibility. So this...