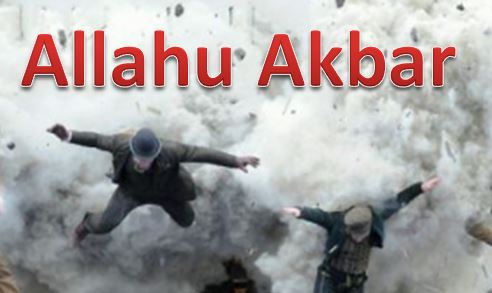 Kori Ali Muhammad is suspected of fatally shooting three people in Fresno, California. When the police were taking him into custody, he shouted an all-too-familiar phrase in the world of radical Islam.

This is how the Associated Press described what Muhammad said:

So why would a trusted news organization like Associated Press change what he said but for the connotation?

We deserve the truth – not politically correct copy edits.

If a man yells “Allahu Akbar” after gunning down innocent Americans, we don’t want the watered down, fake news version. We want the cold, hard truth.

I can assure you “Allahu Akbar” is very different from “God is great” in many ways – especially when the shooting took place outside a Catholic charities facility.

Millions of families across America say “God is great” before they dig into their steak and potatoes every night: “God is great, God is good, let us thank Him for this food.”

Robert Spencer at Breitbart put it this way in an article from 2015 on this exact topic:

“The war-cry is mistranslated in the Western media as “God is great.” But the actual meaning is “Allah is greater,” meaning Allah Is Greater Than Your God or Government.

“It is the aggressive declaration that Allah and Islam are dominant over every other form of government, religion, law or ethic, which is why Islamic jihadists in the midst of killing infidels so often shout it.

“One primary purpose of shouting is to “strike terror in the hearts of the enemies of Allah.” …

“In terms of its connotation, then, “Allahu akbar” can mean just about anything — except the one phrase it is most often rendered as in English, “God is great.””

The question becomes, “Do Muslims and Christians worship the same god?”

You can read the Mohler’s full column here.

So, there we have it. For those in the AP, Muslims and Christians don’t worship the same “God.”

I can’t think of a better person to comment on this than Nonie Darwish.

She was born into Islam, and spent half her life as a Muslim in Egypt. Today, however, she is a born-again Christian with a message for the West.

Darwish believes the AP wrote “God is great,” which really should’ve been translated as “God is greater” because “perhaps they did not want to offend Muslims.”

Darwish discusses the diametrical differences between Biblical values and Islamic values, which you can read about in my article: What Every American Needs to Know About Islam.

Nonie Darwish’s message for America needs to be hand delivered to the Associated Press:

“The West is in need of the truth, regardless of how hard it is to hear.”

Europe: Making Itself into the New Afghanistan?

by Giulio Meotti "Those (migrants) who come to seek freedom in France must participate in freedom. Migrants did not come...