When future historians look back at the beginning of the 21st century, they’ll note that we grappled with many big issues. They’ll write about the battle between nationalism and globalism, soaring global debt, a dysfunctional healthcare system, societal concerns around automation and AI, and pushback on immigration. They will also note the growing number of populist leaders in Western democracies, ranging from Marine Le Pen to Donald Trump.

However, as Visual Cpitalist’s Jeff Desjardins notes, these historians will not view these ideas and events in isolation. Instead, they will link them all, at least partially, to an overarching trend that is intimately connected to today’s biggest problems: the “hollowing out” of the middle class.

VISUALIZING THE COLLAPSE OF THE MIDDLE CLASS

The fact is many people have less money in their pockets – and understandably, this has motivated people to take action against the status quo. 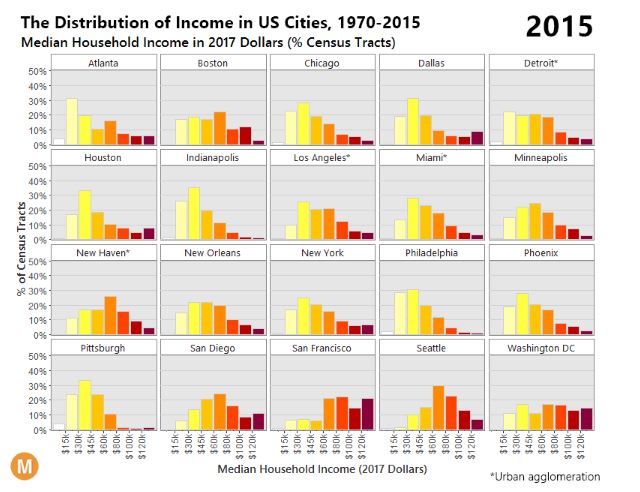 The differences between 1970 and 2015 are intense. At first, each distribution is more bell-shaped, with the majority of people in a middle income bracket – and by 2015, those people are “pushed” out towards the extremes as they either get richer or poorer.

A BROADER LOOK AT INCOME INEQUALITY

This phenomenon is not limited to major cities, either.

Here’s another look at the change in income distribution using smaller brackets and the whole U.S. adult population: 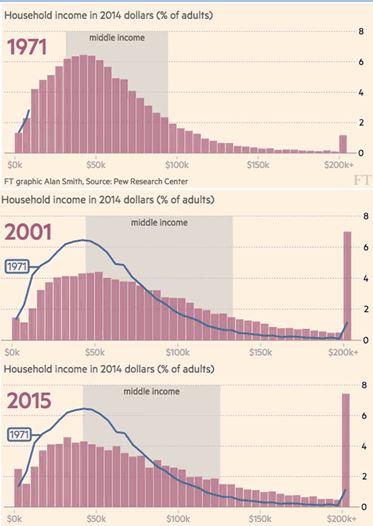 It’s a multi-faceted challenge, because while a significant portion of middle class households are being shifted into lower income territory, there are also many households that are doing the opposite. According to Pew Research, the percentage of households in the upper income bracket has grown from 14% to 21% between 1971 and 2015.

The end result? With people being pushed to both ends of the spectrum, the middle class has decreased considerably in size. In 1971, the middle class made up 61% of the adult population, and by 2014 it accounted for less than 50%.

As this “core” of society shrinks, it aggravates the aforementioned problems. People and governments borrow more money to make up for a lack of middle class wealth, while backlashes against globalism, free trade, and open borders are fueled. The populists who can “fix” the broken system are elected, and so on.

Posted in Financial and tagged Financial, US Citizen.

By Theodore Shoebat The nation of Tunisia is going into a state of chaos and anarchy. Militants are roaming about,...