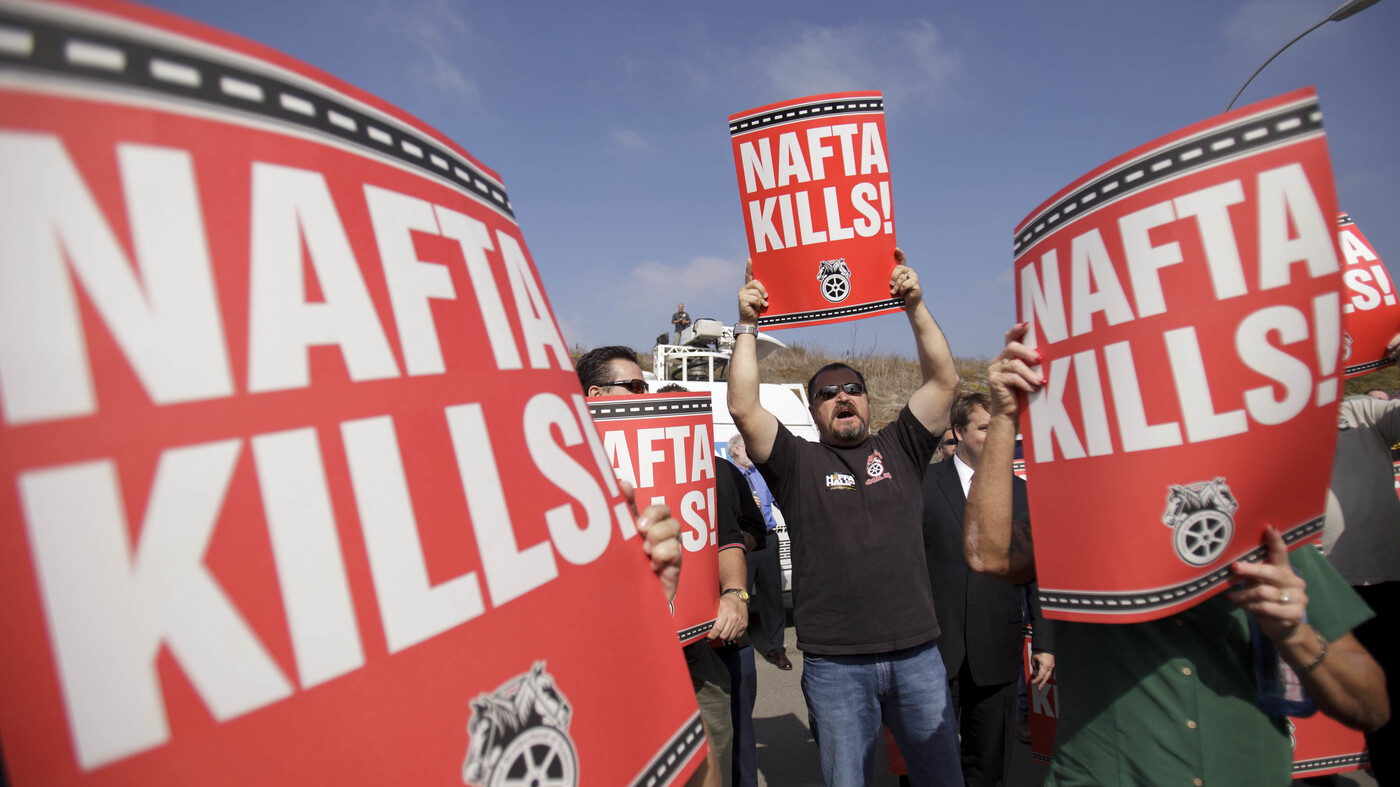 Bill Clinton promised that NAFTA would result in an increase in the number of high quality jobs for Americans that it would reduce illegal immigration.  Ross Perot warned that just the opposite would happen.  He warned that if NAFTA was implemented there would be a “giant sucking sound” as thousands of businesses and millions of jobs left this country.  Most Americans chose to believe Bill Clinton.  Well, it is 20 years later and it turns out that Perot was right and Clinton was dead wrong.

20 years later President Trump is considering withdrawing the USA from NAFTA.The White House is currently mulling an executive order declaring the US’ intent to withdraw from NAFTA, a move that could trigger a renegotiation of the trade pact rather than outright withdrawal, the officials said.

But Trump could also simply launch the US into re-negotiations of the trade pact with Canada and Mexico rather than making a bold move declaring the US’ intent to withdraw.
Some facts that show how NAFTA is destroying the economy…

#1 More than 845,000 American workers have been officially certified for Trade Adjustment Assistance because they lost their jobs due to imports from Mexico or Canada or because their factories were relocated to those nations.

#2 Overall, it is estimated that NAFTA has cost us well over a million jobs.

#3 U.S. manufacturers pay Mexican workers just a little over a dollar an hour to do jobs that American workers used to do.

#4 The number of illegal immigrants living in the United States has more than doubled since the implementation of NAFTA.

#6 It has been estimated that the U.S. economy loses approximately 9,000 jobs for every 1 billion dollars of goods that are imported from overseas.

#7 One professor has estimated that cutting the total U.S. trade deficit in half would create 5 million more jobs in the United States.

#8 Since the auto industry bailout, approximately 70 percent of all GM vehicles have been built outside the United States.  In fact, many of them are now being built in Mexico.

#9 NAFTA hasn’t worked out very well for Mexico either.  Since 1994, the average yearly rate of economic growth in Mexico has been less than one percent.

#10 The exporting of massive amounts of government-subsidized U.S. corn down into Mexico has destroyed more than a million Mexican jobs and has helped fuel the continual rise in the number of illegal immigrants coming north.

#11 Someone making minimum wage in Mexico today can buy 38 percent fewer consumer goods than the day before NAFTA went into effect.

#12 Overall, the United States has lost a total of more than 56,000 manufacturing facilities since 2001.

#14 We have fewer Americans working in manufacturing today than we did in 1950 even though our population has more than doubled since then.

#16 As I wrote about recently, one out of every six men in their prime working years (25 to 54) do not have a job at this point.

#17 Because we have shipped millions of jobs overseas, the competition for the jobs that remain has become extremely intense and this has put downward pressure on wages.  Right now, half the country makes $27,520 a year or less from their jobs.

#18 When adults cannot get decent jobs, it is often children that suffer the most.  It is hard to believe, but more than one out of every five children in the United States is living in poverty in 2014.

#20 According to Professor Alan Blinder of Princeton University, 40 million more U.S. jobs could be sent offshore over the next two decades if current trends continue.

NAFTA has many more weaknesses. First and foremost is that NAFTA made it possible for many U.S. manufacturers to move jobs to lower-cost Mexico. The manufacturers that remained in America lowered their wages to compete in those industries. For these reasons, Donald Trump promised to renegotiate NAFTA or withdraw.

The second disadvantage is that U.S.-subsidized farm products put many of Mexico’s farmers out of business.

NAFTA provisions for Mexican labor were not robust enough to prevent those workers from being exploited.

Since labor is cheaper in Mexico, many manufacturing industries moved part of their production from high-cost U.S. states. Between 1994 and 2010, the U.S. trade deficits with Mexico totaled $97.2 billion, displacing 682,900 U.S. jobs. But 116,400 losses occurred after 2007. The 2008 financial crisis could have caused them instead of NAFTA.

Nearly 80 percent of the losses were in manufacturing. The hardest-hit states were California, New York, Michigan and Texas. They had high concentrations of the industries that moved plants to Mexico. These industries included motor vehicles, textiles, computers, and electrical appliances. (Source:”The High Cost of Free Trade,” Economic Policy Institute, May 3, 2011.)

Not all companies in these industries moved to Mexico.

The ones that used the threat of moving during union organizing drives. When it became a choice between joining the union or losing the factory, workers chose the plant. Without union support, the workers had little bargaining power. That suppressed wage growth. Between 1993 and 1995, 50 percent of all companies in the industries that were moving to Mexico used the threat of closing the factory.

3. Mexico’s Farmers Were Put Out of Business

Thanks to NAFTA, Mexico lost 1.3 million farm jobs. The 2002 Farm Bill subsidized U.S. agribusiness by as much as 40 percent of net farm income. When NAFTA removed trade tariffs, companies exported corn and other grains to Mexico below cost. Rural Mexican farmers could not compete. At the same time, Mexico reduced its subsidies to farmers from 33.2 percent of total farm income in 1990 to 13.2 percent in 2001. Most of those subsidies went to Mexico’s large farms. (Source: “Exposing the Myth of Free Trade,” International Forum on Globalization, February 25, 2003. “Tariffs and Tortillas,” The Economist, January 24, 2008.)

NAFTA expanded the maquiladora program by removing tariffs. That’s where U.S.-owned companies employed Mexican workers near the border. They cheaply assembled products for export back into the United States. The program grew to employ 30 percent of Mexico’s labor force. The workers had “no labor rights or health protections,” according to Continental Social Alliance. In addition, the”workdays stretch out 12 hours or more, and if you are a woman, you could be forced to take a pregnancy test when applying for a job,” .

In response to NAFTA competitive pressure, Mexico agribusiness used more fertilizers and other chemicals, costing $36 billion per year in pollution. Rural farmers expanded into marginal land, resulting in deforestation at a rate of 630,000 hectares per year. (Source: “NAFTA’s Promise and Reality,” Carnegie Endowment, 2004.)

Another agreement within NAFTA was never implemented. NAFTA would have allowed trucks from Mexico to travel within the United States beyond the current 20-mile commercial zone limit. A demonstration project by the Department of Transportation was set up to review the practicality of this. In 2008, the House of Representatives terminated this project.

It prohibited the DOT from implementing it without Congressional approval.

Congress worried that Mexican trucks would have presented a road hazard. They are not subject to the same safety standards as U.S. trucks. U.S. truckers’ organizations and companies opposed it. Otherwise, they would have lost business. Currently, Mexican trucks must stop at the 20-mile limit and have their goods transferred to U.S. trucks.

There was also a question of reciprocity. The NAFTA agreement would have allowed unlimited access for U.S. vehicles throughout Mexico. A similar arrangement works well between the other NAFTA partner, Canada. But U.S. trucks are larger and carry heavier loads. That violates size and weight restrictions imposed by the Mexican government.

Find Out More About NAFTA

So if NAFTA is so bad for American workers, then why don’t our politicians just repeal it?

Well, unfortunately most of them are not willing to do this because it is part of a larger agenda.  For decades, politicians from both major political parties have been working to slowly integrate North America.  The eventual goal is to turn North America into another version of the European Union.

The “highly integrated” forces of Canada, the United States, and Mexico, Petraeus continued, will become the world’s powerhouse for energy and science. “There are four revolutions that are ongoing at various levels in each of the countries but foremost in the United States,” said the former CIA chief, who now serves as chairman of the KKR Global Institute. “The energy revolution is the first of those, which has created the biggest change in geopolitics since the rise of China since 1978.” The other “revolutions” include IT, manufacturing, and life sciences, which, “as highly integrated as they are, allow you to argue that after America comes North America,” he added.

When you hear our politicians talk about “free trade”, what they are really talking about is integrating us even further into the emerging one world economic system.  And over the past couple of years, Barack Obama has been negotiating a secret treaty which would send the deindustrialization of America into overdrive.  The formal name of this secret agreement is “the Trans-Pacific Partnership”, and it would ultimately result in millions more good jobs being sent to the other side of the planet where it is legal to pay slave labor wages.  The following is a description of this insidious treaty from one of my previous articles…

Did you know that the Obama administration is negotiating a super secret “trade agreement” that is so sensitive that he isn’t even allowing members of Congress to see it?  The Trans-Pacific Partnership is being called the “NAFTA of the Pacific” and “NAFTA on steroids”, but the truth is that it is so much more than just a trade agreement.  This treaty has 29 chapters, but only 5 of them have to do with trade.  Most Americans don’t realize this, but this treaty will fundamentally change our laws regarding Internet freedom, health care, the trading of derivatives, copyright issues, food safety, environmental standards, civil liberties and so much more.  It will also merge the United States far more deeply into the emerging one world economic system.  Initially, twelve nations will be a party to this treaty including the United States, Mexico, Canada, Japan, Australia, Brunei, Chile, Malaysia, New Zealand, Peru, Singapore and Vietnam.  Together, those nations represent approximately 40 percent of global GDP.  It is hoped that additional nations such as the Philippines, Thailand and Colombia will join the treaty later on.

Unfortunately, most Americans are as uneducated about these issues as they were back in 1994.

That is why we need to get this information out to as many people as we can.

In Case You Missed It:  Get Ready for the Economic Collapse
Posted in Financial and tagged Clinton, Economy, Illegal Immigration, NAFTA, Unemployment.

Ron Paul Rages At Trump: “Assange Is A Hero… Don’t Declare War On The Truth”