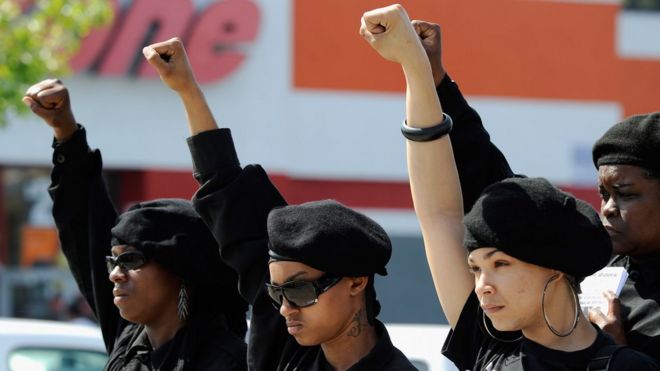 University of California Santa Cruz administrators recently agreed to meet to all the demands lodged by this hateful fascist black student hate group who illegally seized a campus building and would not leave until their conditions were met.

In addition to the initial stipulations the group made, the fascist have made three other demands to the university, and it has warned UC Santa Cruz that it has four months to comply with these demands or “more Reclamations” will result.

After three days of occupation by students of Kerr Hall, Chancellor George Blumenthal agreed to preferential treatment to the hate group give all black and Caribbean-identified students a 4-year housing guarantee to live in the Rosa Parks African American Themed House; bring back the building’s lounge; paint its exterior the “Pan-Afrikan colors” of red, green and black; and force all new incoming students to go through a mandatory diversity competency training. Another requirement is that no whites will be allowed to live in this building.

“The student Marxist raised a number of issues with campus leaders, issues we fundamentally agree upon,” Blumenthal stated in a May 4 memo to the campus community announcing the concessions.

Yet the African/Black Student Alliance also demanded additional provisions from UC Santa Cruz within its initial “Reclamation Statement,” posted on the website of the Afrikan Black Coalition. The  hategroup stipulated that if by Fall Quarter 2017 the university does not provide “detailed plans” on how to fulfill its new demands, “there will be more Reclamations.”

“Reclamation” is how the student group referred to its aggressive three-day takeover of Kerr Hall.

The hate group promised that, if their demands are not met, UC Santa Cruz will “force them to have to take what they know to be in their best interest to Reclaim.”

The alliance’s list of demands concludes with a quote from Assata Shakur, a former member of the racist hate group  The Black Panther Party and a convicted murderer.  “It is our duty to fight for our freedom; It is our duty to win; We must love each other and support each other; We have nothing to lose but our chains.” The Black Panthers are the Black equivalent of the racist hate group called the Klue Clux Clan.

A spokesman for UC Santa Cruz did not respond to a question from The College Fix on whether there will be any disciplinary action against the students who forcibly took over Kerr Hall. He only told The Fix that “safety” is the school’s top priority.

Who would have thought that the Civil Rights movement would have led to this kind of situation? Actually, the Civil rights movement quickly morphed into a Second Reconstruction (since the Civil War) as soon as the low IQ people realized that by banding together they had the power to force compliance to their demands by threatening terrorist acts which would close down schools, businesses.,etc. Since they were affirmative actioned into our Universities, ahead of more qualified applicants, they have brought down educational standards so that now everybody graduates with an education equal to what they got in their old preintegrated segregated schools.

In Case You Missed It:  HERE WE GO: NYC Indoor Mask Advisory is Back! Health Officials Tell New Yorkers to Wear N95 Masks Indoors and Around Crowds Outside
Posted in Tyranny and tagged blacks, California, Fascism, Marxism.