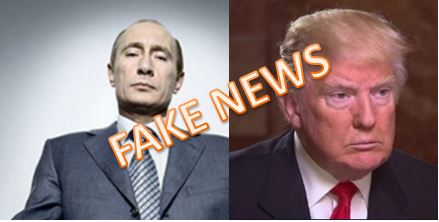 The level of lunacy we’ve reached can be measured by the brouhaha over the presence of Russian photographers in the Oval Office during Sergey Lavrov’s visit: no US photographers were allowed, but the Russians somehow got in and the Paranoid Brigade went into overdrive. They may have planted “bugs” there! No, this wasn’t nutjob Louise Mensch, the queen of the Russia-haters, but “former intelligence officials,” including the former deputy director of the CIA, David Cohen.

Given this kind of paranoia, why allow Lavrov in the Oval Office? After all, he could slip a bug into that sanctum just as easily as somehow who works for Tass – indeed, it would be far easier for him to do so, since photographers are routinely searched before they enter, and I doubt the Russian Foreign Minister is subjected to the same procedure.

Aside from that, the same people who are making a fuss about this are convinced the Trump administration is a cabal of Kremlin agents: so why would the Russians even need to plant a bug in the Oval Office? After all, according to the conspiracy theorists, they’re getting the same intelligence directly from the White House.

Yes, folks, I’m really writing about this nonsense. Because that’s where we’re at these days.

Now the conspiracy theorists who have taken over the Democratic party are screaming that the firing of James Comey is all a part of the plot: Trump did it to scotch the year-long investigation into “Russia-gate,” which has so far yielded nothing. The White House denies this, although we’re now hearing a different and probably far more accurate account: the President was pissed off that Comey wasn’t investigating leaks of classified information, and was paying too much attention to the Russia probe.

If this is true, then one can only applaud the White House and urge them to be more upfront about the reason for Comey’s firing. The “Russia-gate” conspiracy theory is total nonsense, is based on completely unsupportable premises, and is bad for the country. The President should quash it, so he can get back to the job he was elected to do.

The whole thing is a media-driven hate campaign that has no relation to the facts: despite the “high confidence” our “intelligence community” says it has that the Russians somehow mysteriously “influenced” our election, the alleged evidence they’ve made public is nothing but a joke. Indeed, it has been repeatedly debunked by cyber-security experts, and yet the media ignores this, just like they ignored the warnings of those of us who challenged the Bush administration’s “high confidence” that Saddam Hussein had “weapons of mass destruction.”

In short, the multiple investigations into “Russia-gate” are based on nothing but speculation, innuendo, and unsupportable conspiracy theories – and yet they’re consuming the Congress, the White House, and the law enforcement apparatus that is supposed to be protecting us from real threats. The whole thing is a tiresome theatrical performance that has dragged on long enough: it’s long past time for the actors to take their curtain call, roll up the somewhat tattered scenery, and move on to more serious fare.

Speaking of “foreign influence” on US politics, it’s been reported that the intelligence agencies of both Great Britain and Estonia fed dirt on Trump to our own spooks, who then leaked it to their conduits in the media. While “former” MI6 agent Christopher Steele, author of the slanderous anti-Trump dossier commissioned by anti-Trump Republicans, is not officially connected to British intelligence, does anyone really believe Her Majesty’s spies weren’t clued in to the operation?

Of course, that kind of foreign influence is considered perfectly okay, and will never be investigated.

The meeting with Lavrov, which our warmongering media is portraying as Trump taking orders from the Kremlin, is good news: it means that the Trump administration is beginning to implement the President’s campaign promise to “get along with Russia.” At a time when tensions in Europe are at an all-time high, and US troops in Syria are doing their best to separate our Kurdish allies from Turkish aggression, the prospect of better relations with nuclear-armed Russia is a bright spot in an otherwise darkening world. That this development scares the national security bureaucracy, especially some elements of the military as well as the ever-Russophobic CIA, is hardly surprising. The former is counting on inflating the “Russian threat” in order to grab a big share of the defense budget, while the

What’s interesting is how this wave of anti-Russian hysteria is roiling American politics. The Democratic party has been completely captured by it: they sound like a McCarthyite mob out of the 1950s. Instead of howling about “Who lost China?” they’re demanding to know “Who lost Ukraine?”

The Republicans are split: Trump loyalists pay lip service to the “Russian threat,” but their enthusiasm is lacking. The McCain-Graham wing of the party – shrunken quite a bit since the days of George W. Bush – is in some ways more fanatically anti-Russian than the Democrats. They really want a military standoff with Moscow.

Then there are the real leftists, the Bernie Sanders types, who are also split: Bernie himself has jumped on the hate-Russia bandwagon, and many of his followers have followed suit. Yet there are the Sincere Lefties, typified by people like Glenn Greenwald, who are straddling the fence: on the one hand, they are nervous about the Russia-baiting campaign – and even, like Greenwald himself contemptuous of it – but on the other hand they go along with the mainline Democrats’ campaign to appoint a special counsel to head up the McCarthyite witch-hunt for “Kremlin agents” in our midst. This ambiguity is motivated, in part, by a need to appease their liberal fan club: these people are reflexively anti-Trump and don’t much care how he’s brought down. The Sincere Liberals’ problem is that they know too much history – and are far too aware of the foreign policy consequences of the new McCarthyism – to go along with the Russian-under-every-bed hysteria that’s gripped the Democrats’ base.

What they don’t understand – or, perhaps, don’t want to understand – is that there’s no way to separate the witch-hunt on the home front from an actively anti-Russian foreign policy. If Russia is the Main Danger, then that holds true both at home and abroad: there’s no way to escape the logic of Russophobia.

The appointment of a special counsel would mean that the current anti-Russian hysteria would be extended into the indefinite future. It would mean a witch-hunt the likes of which we haven’t seen since the 1950s. And it would preclude any hope of a rapprochement with Russia: no reduction in nuclear arms, no deal over Syria, and perhaps the beginning of a new arms race, with the threat of a major war hanging over us. In short, it would mean another cold war with Russia, and the prospect of World War III.

In a recent interview Greenwald did with the left-wing “Democracy Now,” the pseudo-communist Amy Goodman was eager to buttress the Democratic narrative, averring that the Russia-gate investigation was “getting close to the truth,” which is why Comey was fired. Of course, now that Russia is no longer communist, extreme leftists like Goodman are in the front line of the Russia-haters. Greenwald, however, was visibly queasy:

Yeah, I mean, I think that that’s the obvious perception that, even if you’re trying to wear a lens of thick skepticism through which you’re viewing these events, you have to take into account. You know, but on the other hand, I still think that it’s an extremely dangerous situation when you have two countries like the United States and Russia, drowning in a nuclear-armed arsenal, to have it be politically radioactive on both sides, to be able to have constructive relations. And so, I think it’s imperative that we keep these two things separate.

This is wishful thinking. History teaches us that no such separation is possible. Greenwald & Co. are going to have to choose between appeasing the Democratic base or staying true to their anti-interventionist, pro-civil liberties principles.

The same goes for Rep. Justin Amash, the alleged libertarian Republican congressman from Michigan, who is calling for a special counsel and is sponsoring legislation to set up some kind of “Russian Commission” to look into the issue of alleged Russian “subversion” of our precious bodily fluids. What this would amount to, in effect, would be the restoration of the old House Un-American Activities Committee, which notoriously dragged many writers, actors, and other into the dock, interrogated them, and sent some to prison when they refused to answer questions. The irony of this is that Amash is supposed to be a libertarian, and has made the defense of civil liberties his forte in the House. Yet what does he think will be the result of his “Russian Commission,” if it is ever established? It would be just another device for the government to spy on us, and to intimidate people for having non-approved political opinions. Amash’s support for this cockamamie scheme is inexplicable – unless, that is, he’s trying to stave off another costly primary campaign from the neoconservatives, who hate him. Whatever the reason, his proposal is shameful coming from a supposed libertarian.

Reprinted with permission from Antiwar.com.

Japan’s Health-Care System Has Many Advantages, but May Not Be Sustainable

TOKYO -- Half a world away from the U.S. health-care debate, Japan has a system that costs half as much...