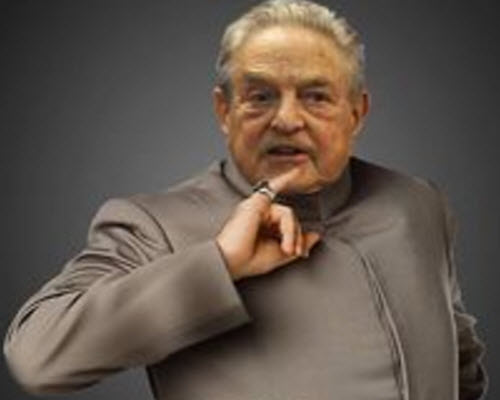 George Soros, the most evil man on earth, is the combustion propelling the anti-Trump attacks front paged each and every day, as well as on TV networks. And all the innuendo-packed dishonest “news” being put out to all media is, frankly…..crap!  Soros has taken events and made them into something they are not with the goal of sabotaging President Trump’s accomplishments and character.

His goal is to work the people up to anarchy, for them to rise and drive him out of office. Soros would then put Hillary in. Soros owns most of the news media and most of the journalists work for him. It is up to the people to stand with President Trump and against those who are vilifying him. It has come to that.

These constant “reports” are dishonest, manipulated, contrived and programmed precisely to turn the public against the man legitimately voted into the Oval Office by the American people.

This past election, that surprised the world, prevented America from being turned into a total Communist nation. And this writer thoroughly believes that with this election, God Himself gave America one final chance to repent from the sin that has enveloped our country and turn back to Him. Preachers, man your pulpits!

There is nothing legit about any of the attacks on President Trump. Soros is the master of the innuendo, which is an indirect suggestion of improper conduct to attack the character or abilities of an individual to inflame the public to rise against him. Soros has successfully pulled this on several countries and at least three countries have warrants out for his capture and arrest.

Move to Have Soros Charged with Treason and Sedition Gaining Support

This columnist has urged all readers to contact the Attorney General, Jeff Sessions, their representatives and President Donald Trump, insisting that Treason and Sedition Charges be filed against George Soros and for that case to be prosecuted. And many have done just that making authorities sit up and take notice. We need more of you to take part.

Stay tuned for a final action that can be taken to assure that this be done.

Here is another letter sent to President Trump regarding the prosecution of George Soros. This letter from Richard Firth can be a model to work from. Readers, it is now up to you to follow suit:
Office of The President
The White House
Washington, D. C.

I want you to support all efforts in getting this world criminal, George Soros, to justice, particularly for his crimes against this country, the chief of which is treason.  There is now in the works a Congressional investigation led by Representative Christopher Smith.  I want you and my Congressional delegation to push hard for this investigation and fully support its recommendations.  If the investigation reveals criminal activity, he must be arrested and immediately tried on those charges particularly if they include treason.

This man has gotten away with much too much causing world governments to topple and he wants to topple this one too.  He has funded 200 organizations to do his dirty work against this nation.

The author of the article, Rev Miles Austin, is dedicated to the cause of bringing this infamous criminal to justice.  We cannot let anyone, including our highest officials, get away with the crimes they are committing against this nation, which to me are Obama, Hillary and James Comey.

I am sending a copy of this letter to my Congressional delegation asking for their full support of any Congressional investigation into Soros’ alleged criminal activities which could amount to treason and then support our attorney general’s effort to bring Soros to trial on those charges as Soros is an American citizen.

TRUMP: No politician in history ‘has been treated worse or more unfairly’ than me

President Trump called out the media Wednesday on how they have treated him unfairly, more than any other politician in history....