The Orange Coast Republicans Club have filed a formal complaint against Orange Coast College professor Jessica Ayo Alabi for preventing Republican students from attending public events on campus. According to the club, three of its members were shut out of the African-American/Women’s round table discussion in the Multicultural Center hosted for Women’s History Month in March of 2017.

On May 16, the OCC Republicans Club was made aware of an email written by Alabi to various campus officials, in it stating that she prevented the students from attending the event because they belonged to the club. In the email she also stated, “If the college will not stand up to the Republicans club, I have decided to stand up for myself and other students.” 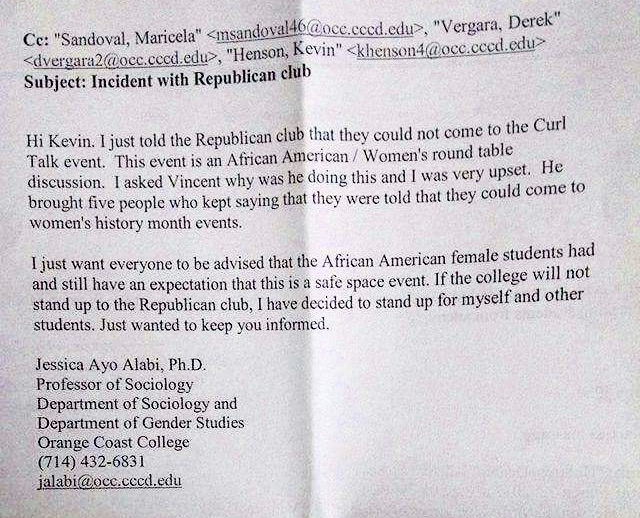 According to OCC Republicans, college president Dennis Harkins spoke with Alabi, notifying her that she did not have the right to block conservative students from attending college events open to the public. However, the club says this doesn’t go far enough, since she’s done this in the past for other events.

The OCC Republicans sent a letter to Harkin with the following demands to prevent conservatives from being discriminated against in the future:

1. That an investigation be opened, or reopened, into Jessica Alibi discriminating against Republican club members, and conservative students as self-reported by her via public email to you.

2. That upon the completion of the investigation if it’s proven that Professor Alabi discriminated against students on the basis of their ideological viewpoint and party affiliation that, at the least, she be suspended from teaching for two non-intersession semesters at Orange Coast College, and if possible as well as the Coast Community College District, and be permitted to return after that suspension once she’s attended an in-depth training on student’s rights and preventing viewpoint discrimination, as well as be required to write a one page long apology letter to the OCC Republicans and the members effected by her actions.

4. That Orange Coast College will take measures to start, or improve, training for faculty and staff on how to respect students’ rights, viewpoints, and be trained on what viewpoint discrimination is to prevent future instances.

This isn’t the first time the college has been hit with this type of complaint. In December, a professor’s anti-Trump rant went viral after a student posted it to the Web.

Alabi is an instructor of sociology and gender studies at the college. She did not respond to requests for comment.

In Case You Missed It:  Georgia Sham Grand Jury Subpoenas Rudy Giuliani and Lindsey Graham to Testify before Their Anti-Trump Charade
Posted in Freedoms and tagged California, Freedom, Liberal Fascism.

Europe is on the fast track to self suicide, as the continent becomes more and more unstable with every Migrant...