CNN is desperate to shove Islam down America’s collective throat. 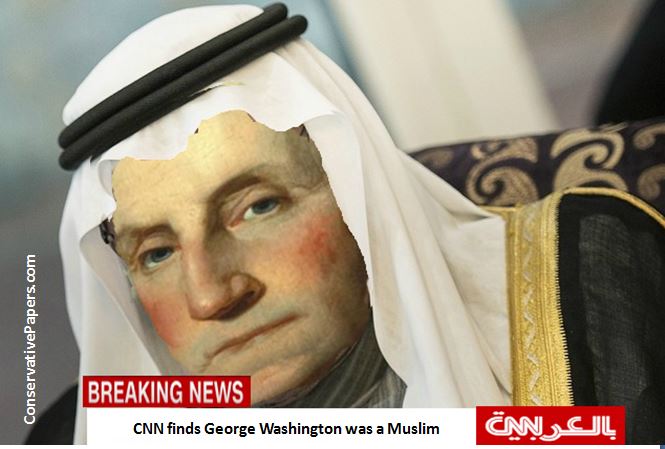 So much so, they devoted an entire show to the idea that Islam is part of America’s founding.

If you believe CNN, we should be a country founded on Islam, not Christianity.

Aside from some interesting vignettes, the program is left-wing, anti-Trump propaganda that firmly establishes the network’s political bias. Bell also serves up some historical distortions of the sort spoonfed to undergraduates on politically-correct campuses, such as the claim that Islam has always been present in the U.S.

“Islam has always been part of the American fabric,” one Muslim man in Detroit tells Bell at an anti-Trump event. “A lot of people think that Islam is from a foreign country, or is a foreign religion. It’s not — it’s very American.” He goes on to criticize “those more violent voices in our society” — and he does not mean radical Islamists. Bell is so impressed that he asks the man, “When are you running for mayor?”, comparing him to a “young Barack Obama.”

It was Obama who told the Muslim world in his Cairo speech in 2009: “Islam has always been a part of America’s story.” He offered a dubious proof: “The first nation to recognize my country was Morocco.” He also cited the Treaty of Tripoli, which was essentially an agreement to pay a bribe to Muslim pirates who had made a practice of kidnapping Americans.

For CNN, the argument that Islam has “always” been present in the U.S. rests largely on the claim that a significant minority of black slaves were Muslim. On Saturday, CNN correspondent Dean Obeidallah claimed that “Islam has been here since the time of slavery, because ten to fifteen percent of the African slaves brought were Muslim. So Islam was here before the creation of the United States. It was actually part of the creation of the United States of America.” Bell’s interviewee raises the estimate, claiming that “during the slave trade, up to about 25 to 30% of the slaves came from areas where there were predominantly Muslim populations.”(Note that these claims leave out the role of Muslims in the slave trade itself, casting Muslims purely as victims.)

There is some basis for some of the claims CNN cites. As Daniel Pipes noted in 2000, “Muslims constituted a significant percentage of the Africans brought to the Americas in servitude; and that, as the most educated and resistant of the captive peoples, they exerted a disproportionate influence on slave life in the Americas.” But the faith did not survive among these populations; few of their descendants knew their forefathers’ Muslim origins.

While Muslims were present at America’s founding, Islam — as a coherent, self-conscious religious and political civilization — was not. Had it been present, one would have expected the Founding Fathers to be more aware of it, and one would have expected to see an American version of the faith emerge, one more comfortable with ideas of tolerance and individual liberty, much as different reformist versions of Judaism flourished in the United States.

To the extent that Islam was a part of early American history, it was a negative force, an external enemy. The predations of the Barbary pirates prompted the U.S. to build a world-class navy and deploy the fledgling Marines. As Brian Kilmeade and Don Yaeger recall in Thomas Jefferson and the Tripoli Pirates: The Forgotten War That Changed American History, Jefferson was shocked when, at a meeting in London with the Tripolitan ambassador and John Adams in 1786, the Muslim envoy declared that American Christians were fair game for piracy: “… all nations which had not acknowledged the Prophet were sinners, whom it was the right and duty of faithful persons to plunder and enslave.”

Meet the Unsung Heroes of the US Border Patrol