The Paris climate agreement was deeply flawed from its start. It was legally and constitutionally suspect, based on politics rather than science, and contained unrealistic goals. It promised not only a dramatic expansion of the administrative state and a huge increase in the regulatory burden on American businesses, it threatened to put the brakes on U.S. economic output at a time when most economists think the U.S. will struggle to achieve even a meager two percent growth.

It’s likely that it was already acting as a drag on the U.S. economy. After President Barack Obama unofficially committed the U.S. to the Paris agreement, businesses began preparing for its impact. Knowing that it would diminish U.S. economic output, businesses invested less and directed more investment toward less-productive technology to meet the climate deal’s mandates. Banks and financiers withdrew capital from sectors expected to suffer under the climate deal and pushed it toward those expected to benefit. A classic example of regulation-driven malinvestment.

The Paris climate agreement was adopted on December 12, 2015 at the conclusion of the United Nation’s Climate Change Conference. Parties to the agreement are expected to begin taking measures to reduce emissions in 2020, mainly by enacting rules that sharply reduce carbon emissions. Countries are supposed to publicly announce “Intended Nationally Determined Contributions” to combat climate change and periodically report on their progress.  The Obama administration announced the U.S. would commit to reduce emissions by 26 to 28 percent below 2005 levels by 2025, a quarter of which was supposedly achievable by the implementation of the previous administration’s legally-questionable Clean Power Plan. 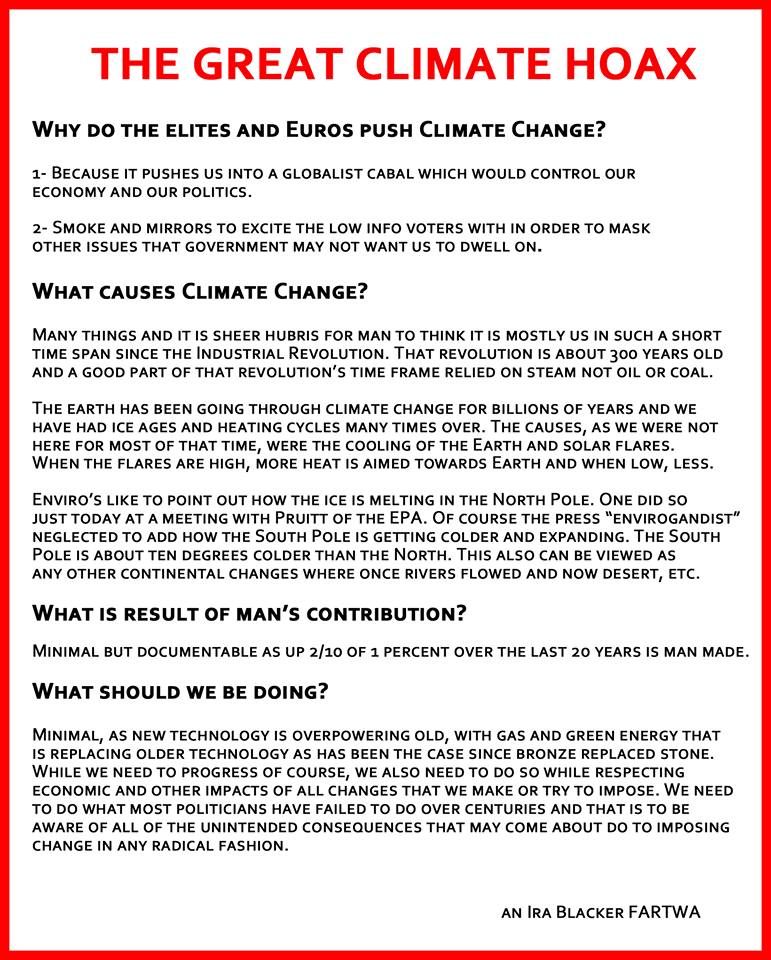 To get the rest of the way, the U.S. would have to make major investments in renewable energy, energy efficiency, and cleaner motor vehicles. This likely explains why the Paris climate deal was so popular with many in Silicon Valley and many on Wall Street. It promised a bonanza of spending and investment, most likely subsidized by taxpayers, in technologies that wouldn’t otherwise be attractive. It was practically calling out for making self-driving, solar powered cars mandatory.

The Paris deal was, in short, a disaster for America and a nothing-burger for climate.

7. The Accord Was A Treaty, And President Obama Refused To Treat It Like One. President Obama joined the Paris Accord shortly before leaving office, but never sent the agreement to the Senate for ratification. There was good reason for that: it wouldn’t have been ratified. Instead, Obama simply assumed that America would now be bound by requirements to tamp down carbon emissions in serious ways. In his statement ripping Trump for pulling out of the agreement, for example, Obama stated, “the world came together in Paris around the first-ever global agreement to set the world on a low-carbon course and protect the world we leave to our children.” But none of that was true. Which meant that the accord was essentially symbolic, but would create a bevy of headlines about America abandoning global leadership every time we didn’t meet an arbitrary line not approved by the American people.

8. There Were Legal Implementation Problems With The Paris Accord. Donald McGahn, the White House counsel, spelled out that courts could theoretically use the Paris Accord to strike down Trump’s attempted rollback of carbon emissions regulations from the Environmental Protection Agency. The Left claimed that this was empty talk — no enabling legislation regarding the Paris Accord had been signed, so it was symbolic. But these are the same people who now say the world will burn up because we’ve pulled out of the accord, and the same people who think the courts should ignore law in order to strike down executive orders they don’t like.

9. It Would Have Had No Impact. Obama himself says, “The private sector already chose a low-carbon future.” So if that was true, what’s the need for governmental cram-downs, exactly? Beyond that, Trump is correct that MIT has estimated that even if the Paris Accord were implemented with current commitments by the various countries, the global climate would be lowered by a grand total of 0.2 degrees Celsius by the year 2100. Meanwhile, we’d put crippling regulations on our economy. MIT and the Left insist that other steps would follow the Paris Accord — but there’s no evidence of that.

10. It Let Other Countries Free-Ride. Obama said in his petulant statement, “It was bold American ambition that encouraged dozens of other nations to set their sights higher as well.” This is absolute nonsense. One of the reasons to be skeptical of the Paris Accord is that it asked nations for non-binding commitments on climate change. Non-binding. As Oren Cass pointed out at

China committed to begin reducing emissions by 2030, roughly when its economic development would have caused this to happen regardless. India made no emissions commitment, pledging only to make progress on efficiency—at half the rate it had progressed in recent years. Pakistan outdid the rest, submitting a single page that offered to “reduce its emissions after reaching peak levels to the extent possible.” This is a definition of the word “peak,” not a commitment. … An April report by Transport Environment found only three European countries pursuing policies in line with their Paris commitments and one of those, Germany, has now seen two straight years of emissions increases. The Philippines has outright renounced its commitment. A study published by the American Geophysical Union warns that India’s planned coal-plant construction is incompatible with its own targets. All this behavior is socially acceptable amongst the climate crowd. Only Trump’s presumption that the agreement means something, and that countries should be forthright about their commitments, is beyond the pale.

11. It Put America Last. Obama and the Left have claimed for years that “green jobs” will be produced by government. There is no evidence of that happening. It’s a chimera. Van Jones, Obama’s “green jobs czar,” couldn’t point to any job creation for which he was responsible. We do know that additional regulations would cripple key industries in the United States without making up for them with these magical new “investments.” The private sector, as Obama recognizes, is already moving toward more efficient energy solutions. But this agreement wasn’t about forwarding that. It was about creating public pressure for the US government to intervene in its own economy, without requiring anything of those with whom we compete.

Good for Trump. The Paris Accord was a meaningless sham, designed mainly to shame the United States into harming its own economy for the vicarious pleasure of others.

In Case You Missed It:  The geoengineering KILL SWITCH has been activated for the entire planet – Feat. Dane Wigington
Posted in Freedoms and tagged Climate, France, Global Warming, President Donald J Trump.